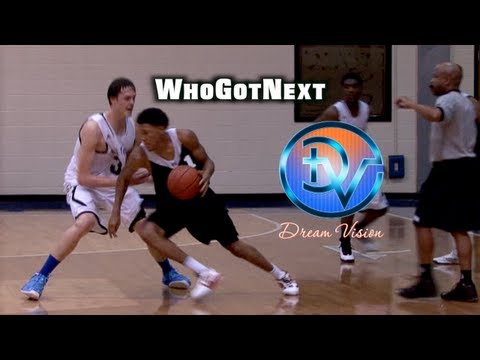 Stephen Zimmerman cemented his position as one of the very best class of 2015 prospects in the nation during both April live evaluation periods. Zimmerman – a consensus top five recruit – has been dominant throughout the spring.

The seven-footer possesses a scary good all-around game: Zimmerman can shoot it and is an adept ballhandler with a skilled back-to-the-basket game. While Zimmerman is looking to improve in all areas of his game, one area that has improved significantly is his aggressiveness.

“I would say that I improved a lot on being more aggressive,” Zimmerman said. Zimmerman’s Bishop Gorman high school took home a state championship last season. “That was a big thing for me to see and to move my game up a level. Just to see how aggressive I can get. That will help me in my overall game.”

For a player his size, Zimmerman’s improved assertiveness is a big deal. Many young big men lack the chutzpah to demand the ball and make their own opportunities. Zimmerman wants his new aggressiveness to rub off on his teammates.

“I think being a leader and bringing momentum to the games and stuff will not only help me but it’ll help everybody.”

His energy has led to increased production, and Zimmerman is working on solidifying his spot up at the top of the national rankings. The talented center now possesses offers from UCLA, UNLV, UConn, Memphis, Kansas, Oregon, UTEP, Auburn, USC, Arizona, Florida State and Notre Dame.

Zimmerman has also been in constant contact with Michigan — he said he’s been speaking with Michigan’s coaching staff about “once or twice a week for the past three weeks.”

“I’ve been talking to them a lot more recently,” Zimmerman said. “They seem like a great coaching staff and everything. It’s a great school.”

Zimmerman watched as the Wolverines made their run through the NCAA tournament this March, making it to the national title game. For him, Michigan’s run didn’t necessarily raise their profile in his eyes because of what he already knows about the program.

“Everybody already knows about them and everybody knows they’re a great school,” Zimmerman explained. “I don’t think it raises their profile or anything. They’re still a great school and they always were.”

However, Zimmerman did take notice of how the Michigan coaching staff used Mitch McGary throughout the tournament.

“They run the same play that we do for Dream Vision, so I was interested to see how he runs the position and how he runs everything,” Zimmerman said. “It was really cool, and I was able to compare it to how I did things at that position.

“He did a lot of things that I try to do. It seems like he was a great fit and they had him doing the right things.”

Zimmerman sees himself in McGary’s passing ability, as well as the star big man’s versatility. Soon, Zimmerman hopes to emulate the all-out style McGary plays with as well.

Zimmerman is unsure of his upcoming visit schedule and still has a long ways to go before making a decision. But Michigan remains high on his list.

“I like their history, that’s always a big thing,” Zimmerman said. “And how they show improvement a lot and how they use all their players to their strengths.”