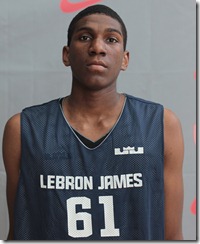 FORT WAYNE, Ind. — 2014 big man Kevon Looney turned in the most outstanding performance of the opening night of the 2013 Spiece Run ‘n Slam in Fort Wayne on Friday.

Looney, who had the attention of nearly everyone in the gym, scored a game-high 28 points, leading his Milwaukee Rebels squad to a 92-86 win.

After the game, mobbed by members of the media, Looney talked about the schools toward the top of his list including Michigan, Duke, Michigan State, Wisconsin and Florida, and discussed his recent in-home visit with Duke head coach Mike Krzyzewski.

“It was a great experience. I learned a lot from Coach K,” Looney said. “He seemed like he was very interested in me. It was a great home visit.”

Looney, who also had recent in-home visits with Florida and Wisconsin talked about his growing relationship with Michigan’s coaches as well.

“They wanted to come in for a home visit, but we already had scheduled all the days,” he said. “So I talked to (John) Beilein a couple times and Coach LaVall (Jordan), I talked to him a lot. We have a pretty good relationship.”

Looney projects to the four at the next level and is a perfect fit for that position at Michigan with his face-up game, jump shot and ability to create. The buzz around the gym was that Looney was cementing himself as a top-10 prospect in the class and he did little to disappoint. Michigan has gotten its foot in the door but still has work to do in Looney’s recruitment.

The loaded Dorian’s Pride squad turned in one of the best team performances of the night, rolling to a 21-point victory in a game that didn’t end until just before 1 a.m.

Led by 2016 Michigan target Josh Jackson’s 28 points, Dorians Pride turned a tightly contest game into a dominant, statement victory. Jackson’s athleticism jumps off the page first but he was able to prove his game is more well rounded than that. The 6-foot-6 wing lit it up in the second half, converting three consecutive 3-pointers, allowing his team to pull away.

2014 Michigan targets AJ Turner and Jaylen Johnson were also impressive in Dorians Pride’s win, scoring 16 and 15 points respectively. Turner can do a little bit of everything from either guard spot and has great size. Johnson is a versatile combo forward that continues to improve and will continue to be tracked by the Wolverine staff.

Vince Edwards and Trevon Bluiett’s teams cruised to easy pool play victories on Friday evening and while UM Hoops didn’t have a chance to focus on either player, both had solid outings.

Edwards, who still has Purdue and Michigan on top, scored 19 points in a pool play victory.

Edwards updated his recruitment with Sean Morrison of the Journal Gazette after the game including a video interview.

Bluiett added offers from Northwestern and Pittsburgh this week and continued his hot shooting spring, scoring 20 points in a 91-45 pool play win. Bluiett is wired to score and he seems to add to his offensive game every tournament.