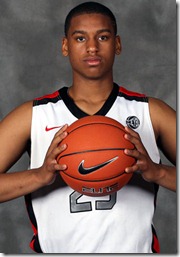 Trevon Bluiett has emerged as one of the most complete offensive players in the country this spring. His 20.1 points per game are the fifth best in the prestigious Nike EYBL and his offensive skillset was on display once again at the Spiece Bill Hensley Memorial Run-n-Slam in Fort Wayne over the weekend.

Bluiett helped his Spiece Indy Heat team to the semifinals of the loaded event and was critical in a Sunday morning victory over the Milwaukee Runnin’ Rebels. Widely regarded as an offensive threat first and a defensive threat second, it was a surprise to see Bluiett’s defensive abilities on full display against five-star prospect Kevon Looney. Looney is bigger, longer and more athletic than Bluiett but there was little doubt who got the best of the matchup. Bluiett denied Looney the ball on the perimeter and was able to use his strength and quickness to keep Looney out of the lane and force him into difficult shots. And he didn’t forget about offense; Bluiett scored 20 points in the win including five made threes in the victory.

Matchups like this are what attract the 6-foot-6 scorer to the AAU summer circuit, providing the sort of competition that he doesn’t see with Park Tudor during the prep season on a day-to-day basis.

“Nothing gets better than this,” Bluiett told UM Hoops. “There’s more competition here than in school ball and if I wasn’t playing travel ball I wouldn’t be the man I am now.”

Bluiett has no shortage of college choices with his scholarship count up to 20. He hopes to narrow his list soon and set his five official visits. He rattled off Butler, Michigan, Indiana, Purdue, DePaul and Cincinnati when asked what schools he feels have made him a priority in the recruiting process thus far.

The number one issue factoring into Indianapolis native’s decision will be his relationship with the coaching staff.

“That player to coach relationship,” Bluiett said. “Nothing gets better than that. Player to player relationships too. Not just on the court but off the court as well.

“A couple coaches that I’m cool with are Coach [Brad] Stevens and Coach [Michael] Lewis at Butler, Coach [LaVall] Jordan at Michigan and Coach [Billy] Garrett from DePaul. Those are the coaches I’d say I have the best relationship with.”

Bluiett’s conversations with LaVall Jordan are less about his game, something Michigan is quite familiar with after tracking Bluiett on the AAU circuit for so long, and are much more general.

“Just that he likes me and that he’s been watching me and that kind of stuff,” he said. “We don’t talk too much about my game, we mostly talk about stuff to take my mind off basketball.”

Bluiett won’t be attending Michigan’s College Practice Camp on June 1st (he’ll be taking the SAT) but he knows what the Wolverines are about. He’s visited Ann Arbor twice already, admitting that he “has a feel” for Ann Arbor and is impressed by the Wolverines’ style of play.

“They are a fast paced team, they aren’t a team that’s just going to slow it up and that’s what I always like in a team,” Bluiett explained. “They know how to utilize their players off the ball screens and that’s something I like.”

Watching Bluiett in Fort Wayne over the weekend it’s clear that he’s in better shape and has added muscle to his frame but there’s still room for progress. Right now, Bluiett’s game is much more about skill – something he has in abundance – and less about sheer athleticism. Bluiett admitted that his goal was to improve, and utilize, his athleticism on the summer circuit.

“Consistently using my athleticism. I have to be quicker, I have to jump higher and guard any position one through five.”