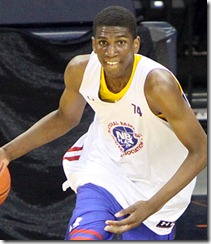 Kevon Looney is arguably the top combo forward in the class of 2014 and Michigan coach John Beilein thinks his system could be a perfect match.

“They tell me that they like me,” Looney told UM Hoops in Fort Wayne on Friday. “And that when I come in they think Glenn Robinson would be leaving and I’d probably fill his position.”

The fit makes perfect sense. Looney is tall and long with the ability to defend multiple positions but he also has a ridiculous skillset offensively for a player his size. Shoot the three? Check. Attack the basket? Check. Pass from the high post? Check. Handle the ball on the perimeter? Check.

Of course, Michigan isn’t the only coach that wants Looney. He has a lengthy list of suitors and isn’t very far along in the recruiting process. Looney hasn’t taken many unofficial visits but hopes to square away plans for his five allotted official visits in the coming weeks. He recently hosted three head coaches for in-home visits: Duke, Florida and Wisconsin.

Deciding what visits to take won’t be easy. At this point, Looney only sounded sure of one visit – his parents want him to visit Duke – but two other schools were mentioned as likely options.

“[Where will I visit] for sure? My parents want to see Duke,” Looney reported. “Duke, Michigan State and Florida are up there – but it could change.”

Michigan coach John Beilein was hopeful to use an in-home visit during the live recruiting period in early April but scheduling issues prevented it. However, Looney reiterated that he has a good relationship with the Michigan staff.

“Michigan they wanted to come in for a home visit but we had already scheduled all of the days,” Looney explained. “So I talked to Coach Beilein a couple of times and Coach Vall [Jordan] – I talk to him a lot and we have a pretty good relationship.”

Looney touched on four other schools that had made a recent impact in his recruitment including Duke, Florida, Wisconsin (his three recent in-home visits) and Michigan State (head coach Tom Izzo called him last week). Looney shared a quick thought on all four schools.

Duke: “[The Duke in-home visit] was a great experience. I learned a lot from Coach K. He seemed like he was very interested in me, it was a great home visit.”

Florida: “I have a pretty good relationship with Florida, they came in about two weeks ago, and they stressed how important I was to them so it was a great visit.”

Wisconsin: “I sat with Bo Ryan a couple of times for games my freshman and sophomore years so it was nice to see him again. He’s pretty entertaining, he’s a funny guy.”

Michigan State: “I talked to Izzo probably two days ago. He was pretty fired up to talk to me. They’ve been contacting me a lot and we have a pretty good relationship. They think I’m very versatile, he said they are good when they have people like me on their team.”

Looney isn’t planning a decision any time soon but the chief goal for John Beilein and every other coach recruiting Looney is clear: secure an official visit. Making the cut for the top five won’t be easy for the Wolverines but it’s clear they are in the thick of Looney’s recruitment and have a fighting chance.