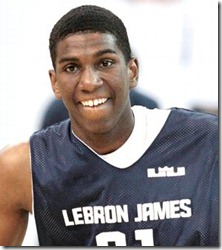 A number of Michigan prospects were in action at the 2013 Spiece Run-n-Slam Classic in Fort Wayne, Indiana over the weekend and UM Hoops was in attendance from Friday through Sunday. In part one of our scouting report we look at Kevon Looney, AJ Turner, Josh Jackson, Cassius Winston and a handful of other priority Wolverine recruits in the 2014, 2015 and 2016 classes.

You don’t have to watch Kevon Looney for long to realize why he’s a top-ten prospect. At 6-foot-9, 210 pounds, Looney is a man among boys on the court, using his incredible size and length to dominate the game. To go along with his overwhelming length, Looney has the handles and the range to be effective beyond the arc as well.

Looney doesn’t get many touches on the block due to his AAU team’s fast paced offense but he’s active and aggressive finishing around the basket. He’s also able to exploit mismatches on the perimeter against undersized quicker defenders. Looney is a good athlete for his size, and no one that’s big enough to guard him is athletic enough to stay in front of him at the top of the key.

He can handle the ball on the perimeter and put it on the floor to get to the basket with ease. When Looney gets to the rim, he’s a capable finisher and does a great job of drawing contact. He can score with his back to the basket or he can face up and just overpower anyone in his way. He’s a good fundamental rebounder and keeps ball high after he secures it, not allowing smaller players to rip rebounds away.

When he’s locked in, he’s a game changing shot blocker around the basket with his length. However, he did demonstrate the tendency to drift out of plays occasionally and got caught ball watching a handful of times.

AJ Turner has the ability to be a terrific guard when he wants to be, but sometimes lacks that killer instinct that all great guards have. Turner has good vision, and is very patient with the ball in his hands. He takes what the defense gives him, and doesn’t force action.

He has good range and great versatility making him very dangerous in the open floor. At 6-foot-6, Turner is bigger than most of the guards he faces, and his ball-handling and athleticism have gotten a lot better. He can be lethal in pick-and-roll offensive sets and would fit in well in John Beilein’s system as a long, athletic wing who can play multiple positions. The knock on Turner is that he has a tendency to get lost in the offense when his jump shot isn’t falling. He has the ability to score 30 points in one game, but then score only five or six in the next. Developing that consistency is the critical next step in his development.

Jackson is one of the very best prospects in the class of 2016 and his full arsenal of weapons was on display in Fort Wayne. At 6-foot-6 with a lot of athleticism, Jackson can do a little bit of everything on the court. Jackson can score from anywhere on the floor and has the ability to take games over when his shot is on point. He’s a streaky shooter with great range and doesn’t need much space to get his shot off thanks to his size and quick release. His range was on full display over the weekend as he consistently knocked down the three and put up big time scoring totals. Although he’s still raw and needs to gain strength and develop, Jackson has imposing length defensively and regularly gets his hands into passing lanes and disrupts the opposing team’s offensive flow.

Jaylen Johnson is a 6-foot-8, 210-pound combo forward who can go for a double-double in any game. Johnson, who led Ypsilanti High School to its first regional title in 28 years, is a big, physical kid, who can dominate games on both ends of the floor. His effectiveness starts on defense, where he’s a great shot blocker who makes opposing players rethink how they’re going to work in the paint. His length bothers opposing forwards and if he doesn’t block a shot, he’ll usually at least alter shots, forcing misses.

Johnson is also a physical force on the offensive glass where he grabs a rebound and quickly gets the ball up to the basket for quick put-back hoops. A bulk of Johnson’s offensive production comes from the high post, but his game still needs some refinement. He needs to work on his ball skills in traffic, handling pressure when he puts it on the floor in the post.

Evan Boudreaux is a physical scorer with a high motor. He scored 27 points in Friday’s pool play action and scored in a handful of different ways. He’s not just a grinder, he has an impressive collection of low-post and mid-range moves that allow him to convert around the basket. He has good court awareness, and can score easily in traffic and through contact – at times even embracing it. He has the ability to put ball on the floor after a high-post catch and get around his defender or go through him to get to the rim. He’s a good rebounder and he’s willing to bang against bigger players in the post and fits the bill as a rugged Big Ten forward.

Eric Davis a lightning-quick point guard who can fill up the stat sheet in a hurry. Davis has the ball on a string against on-ball defenders and with an explosive first step, he can easily penetrate the defense and get to the hoop. At 6-foot-3, Davis has a high, quick release that’s tough for smaller defenders to disrupt. He can score at will from anywhere on the court including mid-range and in the low post. He’s a good passer who, because he’s so quick and agile, gets a lot of attention from help-side defenders. He’s usually a good facilitator and is capable of averaging double-digit assists. At times, Davis trusts his shooting ability too much and settles for contested jumpers without allowing the offense to develop. When it’s a tight, late-game situation, Davis has the tendency to want to put his team on his back and do it all alone.

His game is extremely polished for his age, and looking at his physical makeup, you’d never guess that he’s only going into his sophomore year. Winston looks like he’s getting stronger, and he’s handling contact better in the lane. With great vision, he’s a tremendous passer, and is very smart, with good awareness. He moves extremely well without the ball and has an advanced basketball I.Q., especially for his age. He just understands how to play the game and how to best utilize his tools. Point guards that understand the game are easy to spot on the AAU circuit and that becomes even more obvious at the 15U level. Winston can finish we either hand, and is sneaky quick. He’s good with his back to the basket, and very effective with his mid-range and outside jumper.

K.J. Walton is an athletic slasher that can play both guard spots effectively. Walton’s quickness garners a lot of defensive attention when he puts the ball on the floor, which allows him to get cause havoc in the lane and get to the free-throw line, where he’s a great shooter. In Saturday’s pool play game against The Family, Walton more than held his own with 27 points, including going 19-for-21 from the line.

He’s a good post defender and a great shot blocker, who plays much bigger than his 6-foot-3, 180-pound frame. Walton easily gets to the rim in traffic, but he needs to start attempting to finish with his left hand. He always goes up with his right hand, even on the left side, allowing defenders to disrupt and block his shots. He also needs to improve his shot selection and could take a little bit more care of the ball in transition. Walton recently added an offer from Xavier but will hope to prove himself as a high-major caliber player and he’ll be at Michigan’s College Practice Camp in June.