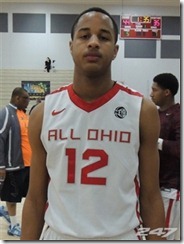 Part two of our scouting evaluations from the 2013 Spiece Hensley Memorial Run-n-Slam Classic feature notes on the two prospects with Michigan offers in action in Fort Wayne as well as a handful of other notable targets.

Edwards is a tough player to evaluate. For one, he plays on the same team as Jae’Sean Tate. Tate was dominant in Fort Wayne with his ability to score above the rim but he also dominated the ball and the field goal attempt column. Edwards doesn’t see quite as many opportunities – partially due to his personal lack of aggressiveness – so he doesn’t always stand out. But if you watch All Ohio Red for more than a couple of minutes you can see Edwards’s fingerprints all over the game. He showed off a back to the basket game, a fairly consistent three point jump shot, strong rebounding, above average shot blocking ability, heads up passing and the ability to attack the basket and get to the lane. While he rarely did everything on dominated a game, he was always doing a bit of something whenever he was on the floor.

The skill set is there – there aren’t many players that can do so many different things on the floor – but the aggressiveness isn’t always. Edwards is skilled enough that he deserves more touches but he has the tendency to drift on the perimeter a bit offensively. Another habit he’ll look to correct is that he plays the game a bit too upright, almost similar to Glenn Robinson III on the perimeter. It’s tough to teach aggressiveness but it’s also impossible to know when the light will go on. Edwards has enough tools to be a prototypical combo forward that it’s worth betting that light will turn on and he’ll elevate his game.

We’ve been keeping tabs on Bluiett for a long time now so his offensive exploits don’t come as a big surprise. Bluiett can score the ball against just about anyone. He has a great jumpshot, can use his 6-foot-6 frame to get to the rim and even has a nice mid-range game. But it’s always encouraging when a guy that you’ve been following for a long time shows off something new. We already touched on Bluiett’s defensive exploits against Kevon Looney but his performance was very impressive – mostly because we haven’t seen that out of him. Five threes on the other end didn’t hurt, although this still wasn’t Bluiett’s best offensive game of the tournament, that would have been his 28 point outburst against Team Thad.

There are a lot of players that can shoot the ball at this level – and Bluiett is no exception – but his craftiness to get his shot off in other areas of the offense is most impressive. He’s still not an overwhelming athlete and needs to continue to refine his upper body but he knows how to use his size to create space and get shots off.

Coleman’s offense is smooth. He can score at all three levels – at the rim, mid range and from the three point arc – and he does an excellent job of picking his spots to attack. He doesn’t have to force shots because he can get just about whatever shot, when he wants it. He has plus size and athleticism to play off of the ball and he shot the ball well for the second straight weekend. Coleman, who made the switch from Spiece to Indiana Elite this season, appears to not only be the best player on his Indiana Elite 2015 team (they won the 16U division) but the best class of 2015 player in the state of Indiana.

Edwards raw ability is obvious. He has a lightning quick first step and can get to whatever spot on the floor he wants. He plays hard on both ends of the floor – and that’s something to be said for a young prospect who had high-major offers during his sophomore season – and continues to improve. At times he can be a bit wild but I would never call him reckless. A lot of young guards have the habit of playing for themselves rather than others in crunch time but Edwards is consistent in his ability to let the game come to him and keep his teammates involved.

The transformation in Gordon’s game is impressive. A year ago he was overpowering players at the 15U level – that was playing up one age group. This year he’s playing 17U – two age groups up – and is still dominant. His ability to attack the basket hasn’t changed but his jump shot is significantly improved. Gordon’s release has transformed over the last year and he was hitting deep threes with regularity throughout the night. We missed his 30 point outburst against Spiece Indy Heat but his ability

The few times we caught Brunson and the Mac Irvin Fire, he was making plays. Brunson is a solid bodied guard that dictates the temp of the game. He showed a good change of a pace that he utilized to get in the lane and he was equally proficient scoring at the rim or dishing the ball to his teammates. Brunson led his depleted Mac Irvin Fire team to Sunday of the event before falling to the highly regarded Team Thad.

The Illinois Wolves 16U team is loaded with a number of talented guards in the 5-foot-11 to 6-foot-3 range. All of them have some form of high major interest and any one of them can steal the show at any given time. Nixon has a bit more size than some of his counterparts and a more refined offensive game. Nixon plans to attend Michigan’s College Practice Camp and is an intriguing player on the next tier of Michigan targets.

Watson stole the show with some huge scoring totals but I was most impressed with his vision in the lane. Every time I watched the Wolves play, it was Watson finding a crease into the lane, drawing the defense, and dishing off to a big man at the rim. He’s not the tallest guard but he’s an above average athlete that knows how to play the point guard position. Purdue has offered and Watson

Benkert’s best asset is his jump shot and he showed off a consistent stroke from mid-range out to the three point line. The key in his development will be his size. There are a lot of players at 6-foot-3 with a nice jumpshot, but if Benkert can grow a couple of inches that shooting ability becomes a real weapon.

Ash, another Illinois Wolves 16U player, is the best athlete of the bunch but his offensive game is lagging a bit behind. He’s not the pure point guard that Watson is or the scorer that Nixon is. Despite that fact, he might have more potential than both players as he adds to his game. He had a couple of big dunks on the weekend but struggled to find consistency with his jumper.