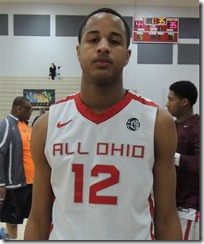 It’s no secret that Michigan and Purdue have prioritized Vince Edwards at the combo forward position. The 6-foot-7 forward demonstrated why both John Beilein and Matt Painter want him so badly at the 2013 Bill Hensley Memorial Run-n-Slam Classic in Fort Wayne over the weekend.

Edwards was critical in helping his All Ohio Red squad take home the 17U Championship in a loaded field. He can do a little bit of everything at the combo forward spot and improved as the weekend wore on.

Edwards had 22 points in All Ohio Red’s semifinal win over Spiece and he added ten in the championship victory over Team Thad.

While it was a statement weekend on the court for Edwards and All Ohio Red, not much has changed in his recruitment. This summer is more about moving close to a decision than attracting additional suitors for the Middletown, Ohio native. He knows the two schools he’s most comfortable with – Purdue and Michigan –  he just doesn’t know how to differentiate the two.

Purdue has been recruiting Edwards throughout his high school career. They offered him in Fall of 2011 and were considered the leader in his recruitment for a majority of the last two years.

Michigan is the new school in the chase. The Wolverines jumped into the recruitment last April and have tracked the 6-foot-7 forwards progress closely over the last year. Edwards finally visited Michigan for its game against Indiana and received a scholarship offer from John Beilein.

The visit was enough to even up the recruitment.

Deciphering between the two schools is difficult because he sees so many similarities between both coaches.

“It’s which school I’m most comfortable with, honestly. Both schools are a good fit for me.”

Edwards elaborated on his decision on Friday evening during a video interview with the Fort Wayne Journal Gazette. While Edwards’s decision will come down to comfort, that hasn’t helped him find differences between both programs.

“Very comfortable [with both schools],” Edwards told the Fort Wayne Journal Gazette. “They all interact with me ,We all get around laugh, joke, text and talk on the regular. I’m very comfortable with all of them.”

“Coach Vall, we’re really good. He calls me on the regular,” Edwards explained. “He’ll call just to get a laugh, or ask me how I’m doing, ask about my grades. He’s treating me like I committed to Michigan already.”

Edwards is in no rush to make a decision, emphasizing the importance of making the right choice rather than the quick choice, but both Matt Painter and John Beilein would love to cross off the combo forward position on their wish list with a commitment.