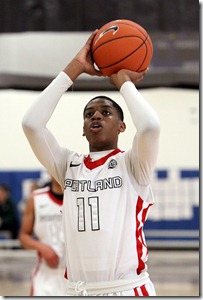 John Beilein has only extended six offers total in the class of 2014 but with just three offered targets remaining on the board that list should grow. When he sets foot on campus, Kameron Chatman is likely to have a place on that list.

The Portland native has been putting up big numbers on the EYBL circuit, playing for ICP Elite. While his team is struggling, posting a 2-7 record so far, Chatman is thriving, averaging 16 points and 11 rebounds per game through two sessions. For Chatman, the numbers lose their luster when his team isn’t having success.

“I wouldn’t say that I’m doing very well right now,” Chatman said during a conversation on Monday evening. “Basically, I need to do more, obviously, to get the team wins.”

However, Chatman is proud of his rebounding numbers, saying he’s been working on that aspect of his game for a while. At 6-foot-7, he has been able to establish consistency in that area, and it’s paying off for him.

Chatman currently ranks fifth on the circuit in rebounding, an impressive mark for a player with a perimeter game.

“I’d say the best thing I’m doing right now is rebounding,” Chatman said. “I always rebounded, but not consistently — sometimes it’d be 12 rebounds and then one game it could be like seven. So I got more consistent in my rebounding.”

Chatman’s production has drawn the attention of some of the top college programs in the country. He has trimmed his list of schools to seven, and Michigan is on it along with the team that bested the Wolverines in this year’s NCAA championship game. Oregon, Arizona, Louisville, Michigan, Washington, UConn and UCLA are all competing for the talented scorer’s services.

It appears Michigan has taken a special interest in Chatman. Out of those seven schools, Chatman said Oregon, Washington and Michigan are recruiting him the hardest. Jeff Meyer recently took a trip to Chatman’s school to have a sit-down meeting with him and his high school coach, Sharrief Metoyer, at Long Beach Poly.

“He came up to my school and we had a good conversation with him, me and my coach. He just told me everything about what they do, the academics and all that,” Chatman said. “He showed me a couple videos of them and stuff like that. He just gave me a little notebook of what the basketball program is like: what they tend to do during practice and before games and all that. We had a pretty good talk.”

But high school visits are far from the only contact Michigan has had with Chatman. The wing said he talks to Michigan “a lot” and that John Beilein has been at multiple EYBL games — and when he’s not, an assistant coach is.

Chatman is impressed by Michigan’s coaching staff, especially when he considers the Wolverines’ run to the NCAA championship game this season.

“They have a good coaching staff. I mean, obviously you can see that, going to the NCAA championship with three freshmen and a sophomore or something like that,” Chatman said. “That just shows you what they’re able to do to get to the NCAA championship with a young team. That just shows you how good of a coaching staff they have.

“The perfect example is Trey Burke. He wasn’t really a highly-recruited guard coming out of high school, and him going to Michigan for two years and turning into a lottery pick, it shows you that they definitely work on skill development in the college years.”

Chatman said he likes being challenged and he knows Michigan coaches would push him to achieve his potential. Michigan coaches have told Chatman he has an offer waiting for him once he makes his way over to Ann Arbor. That could be as early as Chatman’s birthday, June 1st, for Michigan’s College Practice Camp, although those plans aren’t set in stone.

“They said that they have an offer for me, they just want me to get on campus,” Chatman explained. “They don’t really like to offer without you being able to visit the campus and see what they really want. They said once I get on campus, they’ll offer me.

“I think my dad was talking about me going up there for my birthday, June 1st. They have a camp or something like that. I’m not sure right now, but I think I might go up there.”

The other certainties in Chatman’s spring schedule include Nike EYBL Sessions 3 and 4, May 10th-12th in Dallas and May 24th-27th in Minneapolis, as well as the NBPA Top 100 Camp in Charlottesville, Virginia from June 12th-15th.

The interest between Chatman and Michigan is mutual. The Wolverines are in hot pursuit and Chatman likes what he hears.

“They have a great coaching staff and they recruit really well,” Chatman said. “Basically, taking in I would say not-that-highly-recruited high school players and basically pushing them to their potential and what they want to be. For me personally, I think they could push me to my highest potential and hopefully get me to professional basketball.”

Chatman even said the distance between the West Coast and Michigan, an obstacle for many players from that area, doesn’t necessarily faze him.

“Most people say being on the west coast is a factor, but I don’t really feel that way,” Chatman said. “Being from Portland, most dudes for whom it matters, they’re from California where it’s always sunny and stuff. Being from Portland, I’m used to the cold and the rain and stuff. It’s not really a factor for me.”

For Chatman, all of the attention from top programs is nice, but it pales in comparison to simply being on the court again. Chatman was relegated to playing JV basketball all last season for Long Beach Poly because he was forced to sit out a year due to transfer issues. Now that he’s finally back to playing against high-level competition, he’s hungry to prove himself. So far, so good.

“I knew I was coming into playing against the best talent in the country in the EYBL, so I knew that I had to come out and prove myself on the circuit.”