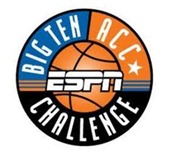 Michigan will travel to Durham, NC to face Duke in the 2013 Big Ten-ACC Challenge. The announcement was made official on Wednesday afternoon.

Michigan and Duke will face off on Tuesday, December 3rd. Times and television information for the Big Ten-ACC Challenge will be released at a later date.

Duke returns Rasheed Sulaimon, Quinn Cook, Amile Jefferson and others and adds transfer Rodney Hood and highly touted freshman Jabari Parker among others. The Blue Devils and Wolverines are both projected as a top ten team by most publications.

The Wolverines will also host Arizona and travel to play Iowa State, Stanford in Brooklyn and to the Puerto Rico Tip Off with potential matchups against Auburn, Charlotte, Florida State, Georgetown, Kansas State, Long Beach State, Michigan and VCU. Find a complete run down of games and dates from Michigan’s future schedules here.

Find a full rundown match-ups after the jump.