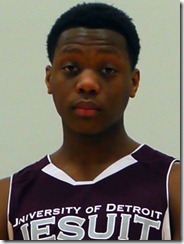 John Beilein’s two guard offense was originally designed to minimize the necessity of a true point guard. He didn’t have a lead ball handler so he leaned on two guards instead of one. In recent years, Beilein’s offense has morphed into a showcase for superb point guard play.

Darius Morris started the trend, Trey Burke took it to the next level and Derrick Walton hopes to continue it. Young point guard recruits are taking notice.

The Wolverines are in a strong position for a number of lead guards in the class of 2015 but class of 2016 guards are intrigued as well. University of Detroit Jesuit freshman point guard Cassius Winston is one of those young guards that likes what he sees in the Wolverines.

Winston already holds offers from UMass, Iowa State and Colorado and rattled off Michigan, Michigan State, Georgetown, Xavier, Ohio State and Iowa as other schools showing significant interest early on. If Winston, who led The Family squad to the 15U semifinals at the Spiece Memorial Run-n-Slam Classic, continues to play like he did in Fort Wayne then his list will continue to grow.

Winston noted that there’s a long way to go in his recruitment but he’s enjoying the process.

“I can’t even pick sides right now,” Winston admitted. “I’m just taking it all in while it lasts.”

Despite the fact that he’s just wrapping up his freshman year of high school, Winston has an idea of what he’s looking for in a potential college.

“Point guard dominant,” said Winston. “Where the point guard controls the tempo and the pace and a great coaching staff.”

For its part, Michigan fits the ball.

“I like Michigan. That’s a point guard dominant team with lots of screen and rolls. They support you and they make sure you take care of your books and everything.”

Michigan assistant coach Bacari Alexander has taken the lead in Winston’s recruitment and has made his mark, so much that the Wolverines might be out in front along with their in-state rivals.

“I talk to Bacari Alexander a lot and every now and then we talk,” Winston explained. “Probably it’s between Michigan and Michigan State leading my recruitment [right now].”

Michigan sees something in Winston’s game that is familiar to Trey Burke: poise. Winston dictates the game and is mature beyond his years when in command of the offense.

“[Michigan] always tells me that I’ve gotta get stronger, faster, bigger, and all that,” Winston admitted. “But they said they like my poise and the way I control the tempo and make the right plays.”

Winston has no firm plans for upcoming visits, although he did mention a potential trip to camp at Michigan State. The young guard has already been to Ann Arbor though, he made the trip to check out the Wolverines during the season.

“I went to a couple games. I watched them play Michigan State and they took me through the locker rooms and practice facilities.

“I love [the atmosphere. A lot of people were out to support. It’s a great atmosphere.”

There’s obviously a long way to go in Winston’s recruitment – Michigan won’t offer class of 2016 players until June of next year – but it looks clear that both Michigan and Michigan State will be involved until the very end in one of the first true head-to-head recruiting battles between the two schools in quite some time.