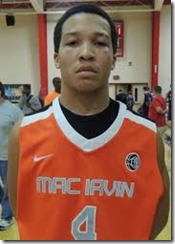 Class of 2015 point guard Jalen Brunson is one of the fastest rising guard prospects in in the country. John Beilein knows a thing or two about evaluating point guards and the Stevenson guard is one that has caught the Michigan head coach’s eye.

Brunson, ranked as a top-50 prospect by Rivals.com, has a lengthy list of suitors including Illinois, Purdue, DePaul, SMU and Xavier but three additional schools are have jumped into the mix with new scholarship offers.

”For the last couple of weeks it has been Tulsa, Virginia and Creighton that have shown the most interest,” Brunson reported in Dallas at the Nike EYBL. “But recruiting has been picking up. I just have to stay patient and take it one day at a time.”

Brunson has helped the Mac Irvin Fire to a 7-6 record through three sessions of the Nike EYBL and is averaging 10.5 points and 5.1 assists per game while playing up at the 17U level. The impressive play on the prestigious summer circuit has caused the Wolverines the jump into the mix.

“Michigan is getting really close to me and trying to get to know more about me. But again, I just really have to stay patient and not rush anything.”

The Wolverines won’t offer class of 2015 prospects until June 15th and require an unofficial visit for an offer but it’s clear that Brunson is a prospect firmly on the Michigan radar.

“Michigan has been to a lot of my games. They’ve shown a lot of interest.

“Coach [LaVall] Jordan [has been my primary recruiter] and also Coach [John] Beilein a little bit. Mostly just those two.”

The Wolverines success on the floor, including at the point guard position with Trey Burke, has made an impact on Brunson.

“Of course [Trey Burke’s success makes a difference]. It’s kind of like my position and it shows that they have a lot trust in their point guard and let him make plays and give him the freedom. That’s what I want and that’s what I look for, for a coach that has trust in me.

Brunson is in no hurry to rush into things and is focused on playing well on the summer circuit and improving his game.

“Not really right now,” he responded when asked if he had any plans for upcoming visits. “Just playing basketball with these guys and trying to get better. But as soon as the season ends, maybe I’ll look forward to getting some visits in.”

Brunson hopes to improve his athleticism in the coming months.

“Just my athleticism. Getting stronger and getting quicker. Also staying in the gym and shooting consistently because you really can’t stop working on your game. Also getting better defensively and sliding my feet. I just have to stay in the gym and work on everything.”