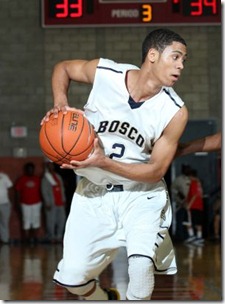 The Wolverines have been tracking class of 2014 ICP Elite wing Kameron Chatman for quite some time and John Beilein will earn a coveted unofficial visit from the versatile forward. Chatman, who we profiled last week, confirmed in Dallas for the third session of the Nike EYBL that he will take an unofficial visit to Michigan on June 1st. The visit not only aligns with Michigan’s College Practice Camp but with Chatman’s birthday. After his visit, Chatman is likely to receive a scholarship offer from John Beilein and the Wolverines.

Chatman doesn’t have other visits scheduled but he does plan to attend the NBPA Top 100 Camp (June 12-15th) and the Deron Williams Skills Academy (June 23-26th). Michigan, Washington and Oregon continue to recruit him the hardest but he emphasizes that distance won’t play a factor in his decision.

While Chatman is a Michigan priority, the Wolverines are also interested in a player that just joined forces with Chatman on the EYBL circuit this weekend, class of 2015 five-star guard Tyler Dorsey.

Dorsey, a 6-foot-4 sophomore at St. John Bosco, is a regarded as a top ten prospect in the class of 2015. Dorsey made an immediate impact on the court by helping ICP Elite, who entered the weekend 2-7, to a 2-2 showing in Dallas. The versatile guard had no problems gelling with his new teammates and averaged an impressive 19.5 points per game in his first EYBL action.

Dorsey has also begun to hear from Michigan in recent weeks.

“[The recruiting process is] going pretty good,” Dorsey told reporters in Dallas. “Lately, Michigan, UCLA and Arizona came up to my school a couple of weeks ago.”

The Wolverines’ interest is in the preliminary phase but follows a trend of Michigan focusing additional recruiting resources on the West Coast.

“They just actually started [recruiting me],” Dorsey said of Michigan. “The first day they came up to my school, that was the first time they started recruiting me.”

Michigan is far from the only school recruiting the blue chip guard. Dorsey’s lengthy list of suitors includes Arizona, Illinois, UCLA, Duke, Florida, UConn, North Carolina State among many others.

Dorsey is a bigger guard at 6-foot-4 but does see himself as a point guard at the next level. While Dorsey is still learning more about Michigan, he admitted that Trey Burke’s success could influence his decision. He’s very interested in how teams utilize their point guards.

“[Their success] does help,” Dorsey explained. “I’m looking at my future being a point guard so I look at the history of what the coaches and how many point guards are in the league, how good they are and how they were developed.”

Michigan is new to the chase but continues its renewed aggressive national recruiting approach in pursuing top prospects. John Beilein told the Detroit Free Press on Friday afternoon that he’s impressed with the recruiting reaction to Michigan’s recent success on the floor.

“We can’t forget what got us here, kids a little under the radar, but at the same time, this is Michigan and we should be able to recruit some really talented players. Their school coaches high and their AAU coaches and they themselves probably have a better appreciation of Michigan than maybe they had beforehand.”