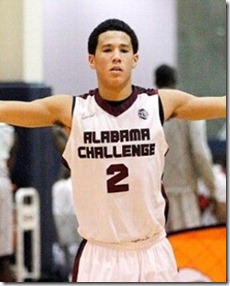 To say Devin Booker’s recruitment is “blowing up” right now would be a bit of a misnomer. It’s actually been blowing up for a while.

Two years ago Booker was just one of 60 kids in the underclassmen session of Michigan’s College Practice Camp. Few in the state knew much about him but his big performance in Ann Arbor would be the start of things to come. Since June of 2010, Booker has gone from unknown to five star and has college coaches lining up for his services.

The 6-foot-5 Grand Rapids native has been impressing everyone on the Nike EYBL circuit, averaging over 17 points per game for the Alabama Challenge. However, there is one area Booker would like to see improvement in, according to his blog: turnovers.

“I personally want to cut down my turnovers,” Booker wrote. “I felt like I had way too many turnovers in the last session.”

While Booker is focusing on areas of his game he can improve, college coaches across the country are noticing what he does well. Michigan continues to be a very active player in his recruitment.

“You want to see teams win and making it to the National Championship is everybody’s goal and they did that,” Booker said in Dallas for the third session of Nike’s EYBL. “You also want to look at your position and how they utilized the player at your position, and they’re doing a pretty good job of that.”

Michigan has been recruiting Booker since he was in eighth grade, but the Wolverines have recently encountered some especially visible competition in their recruitment of the talented swingman.

Name a school with a rich basketball history and a winning tradition and they probably have a scholarship waiting for Booker. Duke, North Carolina, Kentucky and Florida have all offered scholarships.

But Booker says the one school that’s noticeably stepped up has been John Calipari and Kentucky.

“Kentucky has bumped it up a lot,” Booker wrote in his blog. “At first I thought it was just minor interest, but then I got the offer and now Coach Calipari is basically the one that’s doing the recruiting. That’s who I mostly talk to on the phone.”

With that being said, Michigan remains squarely in the running. Booker is planning on going to a few camps this summer: NBPA Top 100, Kevin Durant, Chris Paul and LeBron James’s camps are all on the docket. As of now, Booker said Michigan’s College Practice Camp on June 1st is a maybe on his schedule.

“I’m not sure [if I can make it to camp],” Booker reported. “I think they mentioned it to me. If I’m up there (in Michigan) and have no camp or anything else, I might go.”

Booker has always emphasized enjoying the process of his high-level recruitment, and that’s not going to change. He “loves” playing on the EYBL circuit and doesn’t have any plans to trim his list until after the summer.

“I don’t have any timeframe right now, but probably after the summer is when I might actually cut it down of some sort,” Booker said. “And then I’ll go from there.”