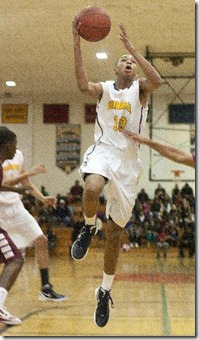 While the Saginaw native might be known more for his scoring prowess at this point in his development, he knows that he wants to play point guard in college.

“A lot of people want to recruit me as a two but really I’m a point guard,” Davis said. “I’m still a point guard. I’d model my game after (Syracuse point guard) Michael Carter-Williams.”

The 6-foot-3 guard has all the tools to be a great scorer: he’s lightening-quick and has an excellent jumpshot he can hit from anywhere on the floor. And while he’s a very good facilitator, he often turns to his scoring when his team is in a tough spot. That could be where his reputation as a scorer comes from.

Watching former Michigan point guard Trey Burke this season — a facilitator who was also a prolific scorer — motivated Davis and gave him something to shoot for.

“Trey Burke took it to a whole another level,” Davis said. “That’s what it takes. That’s what a point guard does and I feel like I could do that also.”

Davis has all the tools, and schools all over the country have noticed. Davis reports offers from NC State, Illinois, Oregon, Iowa, Iowa State and Michigan State.

As a member of the class of 2015, Davis feels lucky to have garnered the attention he has so early.

“That’s a real blessed experience,” Davis said. “I know not too many kids my age have an offer list like that. It’s a really great experience to hear from all these coaches at a young age.”

Michigan is heavily involved in Davis’s recruitment, as well. An offer from the Wolverines wouldn’t come until after the end of his sophomore year, but they have shown plenty of interest.

“I’ve been talking to them almost every two weeks,” Davis said. “They’ve been telling me they like me a lot and they’re going to continue to recruit me hard so get ready for it.

“Bacari Alexander is talking about offering me maybe my junior year.”

Michigan is developing quite a history of point guards, and Davis would fit right into that line. But not only would he fit in a growing trend — Davis feels he would be a great fit with the makeup of Michigan’s roster and its team atmosphere.

“I think I’d fit in well,” Davis said. “They surround point guards with great shooters and great big men. Those guys are great off the court and they are loving teammates.”

As for his summer plans, Davis has a full docket. The Saginaw native has plans to visit Kentucky, North Carolina and Duke, and he will be at camps run by Chris Paul, Deron Williams and LeBron James. Davis said he would attend Michigan’s College Practice Camp if he could but is likely to be at USA Basketball U16 trials at that time.

For now, Davis is enjoying the recruiting experience as he continues to improve his game.

“All the schools that are recruiting me have an up and down tempo, a great coaching staff, and they welcome me in as a family,” Davis said. “I’m looking forward to it.”