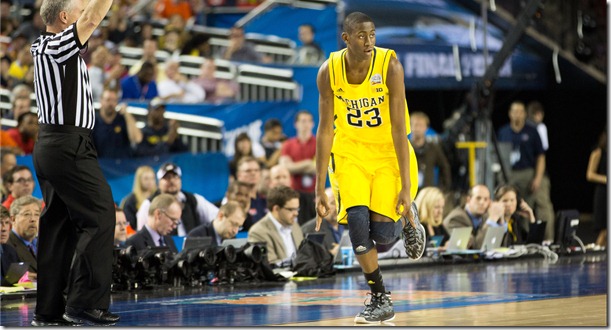 @joealexis: Isn’t Caris LeVert being overlooked for next season? I think that he has tremendous upside.

@RyanParrill Chances Irvin doesn’t play more min than LeVert like people are concluding? LeVert was expected to RS & also used for his defense at the end of the year.

I love LeVert’s potential but his offensive production really tailed off in Big Ten play. Of Michigan’s returning players, it’s tough not to single out LeVert as one guy that might make the most important. He’s young for a freshman, he’s still growing, he has a ton of room to add strength and most importantly he made some plays as a freshman. Zak Irvin is actually only 11 days younger than LeVert. He’s also a really good player. Michigan needs to replace a lot of offensive firepower and Irvin fits the bill.

LeVert seems like the perfect super sub because he can combine well with other pieces. He has the quickness to guard smaller players and the length to guard some bigger wings and I expect his offense to continue to develop. Penciling Irvin into the starting line up isn’t so much a knock on LeVert, or doubting LeVert’s potential, it’s more about what Michigan needs to replace and who is best suited for that role.

This might be sacrilege to my readership but I’m going with Gary Harris. I would argue that Harris had the better freshman season and he was playing through shoulder injuries. Robinson averaged 10 points and five rebounds in Big Ten play, Harris averaged 14 points, two rebounds and two assists.

@colintj What will the possession usage distribution look like next year?

It’s no secret that Michigan loses the two players that dominated the ball in the offense. Trey Burke used 29% of Michigan’s offensive possessions while he was on the floor and Tim Hardaway Jr. used 22.3% of UM’s possessions. That means roughly a half of the offense is up for grabs. What do the Wolverines return? A bunch of high efficiency, low usage players.

The jump from low-usage high-efficiency player to high-usage high-efficiency player is very difficult. Some players are wired to take shots and demand the ball. That’s not to say it’s impossible but high-usage players usually remain that way and low-usage players usually remain that way.  Tim Hardaway Jr. used between 22 and 26% of Michigan’s offensive possessions throughout his career. Zack Novak and Stu Douglass both hovered between 13 and 17.5%. You get the picture. There are exceptions to the rule, players like Darius Morris, Drew Neitzel, Tim Frazier and Erick Green all made big jumps in usage throughout their careers.

The clear option to take more shots on Michigan’s roster is Mitch McGary. Luke Winn estimated Mitch McGary’s usage rate to be 23.9% in NCAA tournament games and I would suspect that to rise steadily from there. McGary will become more involved in the offense and he began to show just how many things he was capable of during Michigan’s tournament run.

One guy who I’m convinced will be ready to take shots when he steps on campus is Zak Irvin. Irvin’s not a ball hog but he is a scorer and he knows how to create offense. Playing on the wing in John Beilein’s offense will give him plenty of opportunity to create and he won’t hesitate to take those chances. I wouldn’t be surprised to see Irvin lead the Wolverines in usage rate as a freshman although I expect a more balanced offense.

While Nik Stauskas and Glenn Robinson III will take more shots next season, I’m not convinced that either player would be comfortable using a quarter (or more) of Michigan’s possessions while they are on the floor. Robinson used less than 14% of Michigan’s offensive possessions in Big Ten play so a jump to the upper teens or low 20s would still be a big jump.

The point guard position has used 29% 27% and 29% of Michigan’s offensive possessions over the last three seasons. Michigan had pros at the point guard for the last two seasons but the position has grown into the focus of Beilein’s offense in recent years. I don’t think Walton will lead the Wolverines in usage but he’s sure to shoulder a big chunk of Burke’s usage.

@zajareich It seems like football has seen an increase in recruits recruiting potential targets, how often does that happen in basketball?

This definitely happens but it’s on a smaller scale in basketball than football as you are talking about classes of two, three, four or five prospects compared to 25 or so on the gridiron. Look no further than Mitch McGary, Glenn Robinson III and Spike Albrecht all ending up at Michigan from the same AAU team.

Austin Hatch helped recruit Mark Donnal and Monte Morris on the day that all three prospects were offered three years ago. Donnal committed the same day.

So this stuff goes on, there’s just a lot at play in every recruitment. The kid, his family, his high school coaches, his grassroots coaches. Summer events like the EYBL or various AAU events also provide a great stage for kids from different states and regions to meet up. In Michigan’s case, there’s not much here because Beilein’s only commitment in the class of 2014, Ricky Doyle, lives in Florida and doesn’t play AAU basketball – lacking both the regional and grassroots connections to act as a recruiter. Michigan’s other 2014 targets are far along in their recruiting processes and seem unlikely to be swayed by others at this point. It seems like it would be more likely to see this sort of bounce in the class of 2015, where Michigan’s recruiting is still taking shape.

@dsobes What can the Michigan team do to emulate more effective offenses in the NBA, like increasing corner 3’s and less long 2’s?

First of all, the corner three isn’t technically a more effective shot in the college game. The NBA three point line is closer in the corner but the college line is is equidistant all the way around.

Minimizing long twos is always a worthy goal but Michigan does alright in this department. According to numbers from Hoop-Math, just 30% of Michigan’s field goal attempts were two point jumpers. That number isn’t bad compared to some other Big Ten schools, 34% of Michigan State’s FGAs were 2-point jumpers, OSU 36%, Wisconsin 32% and Indiana 29%.

Not only that, Burke and Hardaway accounted for 387 (58%) of UM’s 663 2-point jumpers last year. No team is going to completely eliminate the two-point jump shot but the Wolverines do a decent job of minimizing those attempts. Michigan actually shot the exact same percentage on two-point jumpers as three-point jumpers, a reminder that the threes are always preferable.

Do you think the proposed rule changes will have any effect on B1G play? – D. Walter

A couple sections of the rule changes caught my eye, mainly the discussion of charges and freedom of movement.

You aren’t going to hear many complaints here. Michigan has probably taken more of the charges that are being outlawed than been called for for them but that rule seems like a good one.

The emphasis on rules to impede the progress of a player are what John Beilein has pleaded for year in and year out. However, file that one under “need to see it to believe it”. The enforcement of those four principles has the potential to change the game but I’m not confident it can be refereed correctly.