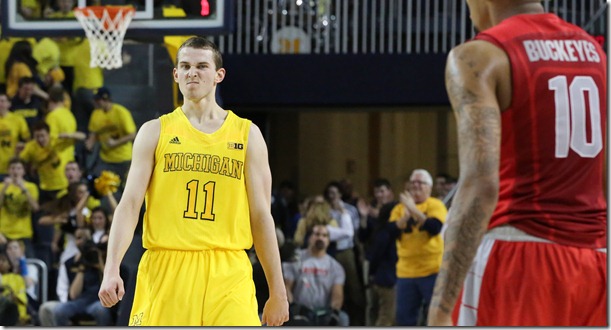 Single-play match-ups for the 2013-14 Big Ten season were announced on Tuesday afternoon. Here are three quick reactions to the draw.

1. Single-play problem needs to be fixed

If you believe the school presidents, an 18 game schedule is here to stay and divisional splits in basketball aren’t coming anytime soon. That means the single-play problem isn’t going away anytime soon.

Competitive balance is one thing but basketball fans lose out on great match-ups as well. Michigan’s home games against Ohio State have been some of the very best in Crisler Center and the Wolverines will miss the Buckeyes at home this winter. Michigan State and Michigan haven’t drawn a single-play lately but it would fall within the rules, just ask Purdue and Indiana who will only play once this season.

With the addition of Maryland and Rutgers to the fray, the single-play problem becomes magnified. With 14 teams and 18 games, every Big Ten school will play five teams twice and eight teams once.  There’s no really good answer or solution to the problem.

Brian Cook suggests we go the way of the Scottish Premier League, splitting the game mid-way through the season and having the top group play for a championship. That is probably never going to happen – mostly because it would doom the bottom half of the league to RPI purgatory – but it would certainly do a good job of determining the best team in the league.

There’s been talk of protecting rivalries, something David Brandon is in favor of, but as great as the rivalries are that will also make it a lot harder for Michigan to win a Big Ten title if two of its five double-plays are against perennial contenders Michigan State and Ohio State. One team could have Rutgers, Northwestern, Penn State and Nebraska in its “double-play” list while another could have Michigan State, Michigan, Ohio State and Indiana. While that’s an extreme circumstance, it’s not impossible either and that’s the problem.

The Big Ten values the regular season conference championship more than any other league in Division I and that achievement is inevitably going to be watered down due to league expansion.

I would say the Wolverines drew one contender, two middle of the pack teams (I’m giving Penn State the benefit of the doubt with the return of Tim Frazier) and one bottom third team. The bad news is that the Wolverines play the two best teams of the bunch (Ohio State and Illinois) on the road and lose out on more winnable road games at Northwestern and Penn State.

Michigan doesn’t have the worst draw, but it doesn’t have one that’s going to prove a big asset coming down the stretch in conference play. Michigan will play at Michigan State, Ohio State, Wisconsin, Indiana, Iowa and Illinois. Basically a who’s who of Big Ten contenders so there won’t be any shortcuts for Michigan to make a run at the Big Ten crown.

From a fans point of view it’s also disappointing to lose two pretty quality home games in Illinois and Ohio State but a December home game against Arizona should make up for some of that.

The full list of single plays can be found here, but here are a few schools that jump out with the best and worst draws.

Wisconsin and Ohio State made out like bandits on Tuesday. The Badgers avoid road trips to East Lansing and Columbus while the Buckeyes don’t travel to Ann Arbor and also play Wisconsin and Indiana just once. Ohio State plays fewer teams in the projected top third twice but Wisconsin’s single plays against MSU and OSU could prove critical come tiebreaker time late in the season as head-to-head records come into play.

Michigan State got a rough draw with Nebraska and Minnesota at home, Purdue and Wisconsin on the road. The single play against Wisconsin is nice but the Badgers are significantly harder to handle at the Kohl Center. Iowa is a sexy pick as a breakout team next year but single plays against Purdue, Nebraska, Penn State (road) and Indiana (road) are nothing to celebrate. That means the Hawkeyes will face Michigan State, Michigan, Ohio State and Wisconsin twice.