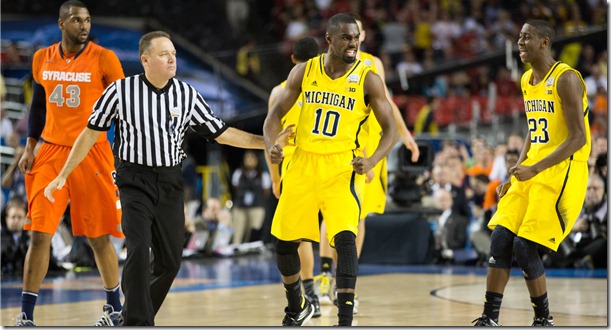 Conventional wisdom has kept Tim Hardaway Jr. out of the first round of this year’s NBA Draft. The junior out of Michigan still has a ways to go toward improving his handle, consistency and shot selection. Hardaway is doing all he can to alter this assessment.

According to ESPN’s Chad Ford, Hardaway has been extremely impressive at pre-draft workouts, not only competing against fellow guard prospects such as Isaiah Canaan, but besting them. Ford called Hardaway “the best player on the floor for all two hours” of a workout that he watched on Tuesday. Here’s more from the article:

He played with terrific intensity, nailed shots from all over the floor and played above the rim whenever he hit the paint. While he doesn’t have his father’s crossover, he handled the ball against Canaan and was able to get where he wanted on the floor.

But it wasn’t just Hardaway’s game that has impressed scouts — it’s his measurables as well. Hardaway’s leaping ability scored well, and his surprisingly long 7-foot wingspan is a big leg up as a shooting guard. Paired with his improved defense this season, that measurement has scouts perhaps looking at Hardaway a little differently.

According to Ford, Hardaway could even be looking at possibly taking a spot in the first round. Ford wonders if Hardaway has placed himself in he same conversation as Ben McLemore and Victor Oladipo, two guards he competed and held his own against.

“I feel like I played well against both of those guys,” Hardaway told Ford. “I feel I can play with anyone in the country.”

As numerous big board projections and mock drafts continue to crowd the hype leading up to the draft, Trey Burke’s place among the top five players likely to be selected seems secure.

Both ESPN’s Chad Ford and Sports Illustrated’s Chris Mannix project Burke as the first point guard off the board and a top-5 selection. Ford even goes as far as to say Burke could land the top pick overall if the Magic are picking in that spot. However, Ford also sees Burke landing with the New Orleans Pelicans as a likely possibility. The Draft Lottery will take place on May 21st and could likely have a big impact on Burke’s eventual landing spot in the draft.

There’s little doubt that Burke is the top point guard in the draft. ESPN’s Fran Fraschilla thinks there is a massive drop off from Burke to the other point guards in the glass.

“There are so many after Trey Burke, who is the obvious, I think, top pick at that position because of what he accomplished this year,” Fraschilla said on a conference call Wednesday. “Just with an NFL Draft and if these guys were not point guards but cornerbacks, you’d see a lot of trading down to acquire extra picks because after Burke, there is not a ton of difference in my mind between seven or eight guys that play the point guard position.”

Mannix dismisses Burke’s lack of size in his latest big board, saying the point guard’s expertise in running the pick and roll will certainly trump any concerns NBA GMs may have about his height:

Here’s why several executives are dismissing Burke’s lack of size and swear he will be effective: The pick-and-roll is an NBA coach’s bread-and-butter play, and Burke excels in it. Short(ish) point guards tend to slip into the late teens/early 20s (see Ty Lawson, Jameer Nelson, Darren Collison), but Burke’s combination of scoring ability and underrated playmaking — his 3.02 assist-to-turnover ratio was fifth in Division I last season — will make Burke the first playmaker off the board.

Hardaway is up to No. 35 on Chad Ford’s Big Board as he inches closer to the first round.
Draft combine starts today

The NBA Draft Combine runs on Thursday and Friday and will provide an excellent opportunity for players to push their draft stocks to the next level. The Draft Combine will air live on ESPNU and ESPNU throughout the next two days with Thursday broadcasts at 10 a.m. (ESPNU), 2 p.m. (ESPN2) and Friday broadcasts at 10 a.m. (ESPNU) and 2 p.m. (ESPN2)

Trey Burke, whose spot is mostly solidified in the top tier of prospects, is unlikely to see any significant rise or drop, barring something highly unexpected. Because of his high stock, Burke will not participate in the skills portion of the combine.  However, his measurements will be big. If he can prove to scouts once and for all that he is over six feet tall, that would go a long way. Ford said there is also a concern about his quickness and explosiveness, so if he can put up solid numbers in athletic testing that would be another boost.

The media already found Burke in Chicago for this video interview.

For a player like Tim Hardaway Jr., the combine is an opportunity to show scouts he belongs firmly in the first round. It would be difficult for an NBA GM to sit down with Hardaway for 30 minutes during the interview portion and not come away impressed. If he continues to excel during workouts, it would go a long way toward increasing his draft stock. At the very least, Hardaway could catch the eye of some scouts and earn additional looks for in-person workouts overt he coming month. Hardaway has already met with the Sacramento Kings in Chicago.