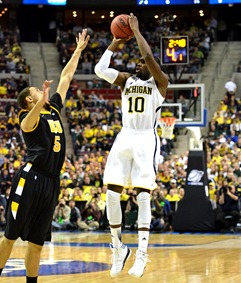 Chad Ford was available to the media as part of ESPN’s coverage of the NBA Draft Combine and answered a couple questions about Michigan’s participants for UM Hoops.

After two years of watching him, I think scouts have his game down. They all like him. If he was a few inches taller, he’d be Nerlens Noel’s most serious competition for the No. 1 pick. I still think he has an outside chance to go No. 1 if the Magic or Pelicans or Jazz get the No. 1 pick. I think he can help himself at the combine by showing he’s a better athlete than scouts think he is. He doesn’t quite match up with some of the elite PGs in the NBA in the athletic department.

He’s very competitive. Plays very hard. Has been shooting the ball very well and defending.  His long wing span and size at his position will help his cause. Scouts were lukewarm on him all year, but if he performs really well in workouts, I think he moves up the board a lot and could end up in the mid to late first round. He’s still on the bubble right now, but there’s a chance to leap frog a lot of people.