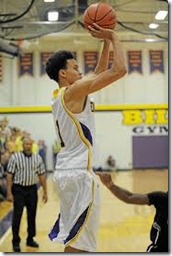 Turner was thought to be one of the leading candidates for Michigan’s Mr. Basketball award next season after averaging 18 points and six assists and earning third team All-State mention. Michigan is continuing its recruitment of the talented swingman, along with Michigan State, Northwestern and others. Turner is rejecting interview requests at this point but released the following statement on his move.

As reported this weekend my family and I have decided that it would be best for me as a student-athlete to transfer and reclassify to New Hampton Prep in New Hampshire. I will now do two years of school at New Hampton and will graduate in the class of 2015.

I began school at an early age and have always taken pride in my academics and that will continue going forward. I have been an honor roll student all of my life and I have already passed the ACT. I know the decision I have made is a challenge but I am up to facing that challenge and I feel it will only help me down the road grow as a student-athlete.

It has been made aware to me and my family that I am extremely young for the class of 2014 so I find great excitement in reclassifying into the proper graduating class for my age. My family and I have decided that New Hampton Prep will give me the opportunity to graduate in my proper class of 2015. It will also give me the opportunity to flourish academically and continue to develop as a basketball player and grow as a young man.

With that said I would like to thank Coach Hutchins and the New Hampton family for opening their arms and bringing me in. I am excited to start the opportunity that they have provided for me.

I would like to start off by personally thanking Coach Greg Esler for all you have done for me and for giving me the chance to be a Pilot. I will always be thankful and grateful to you and the rest of the coaching staff at DeLaSalle. All the traits you have taught me on and off the court such as hard work, leadership, and discipline I will take with me to New Hampton and through out the rest of my life.

Brother Bob has always supported me and has always been in my corner so I will also like to thank him for all he has done.

A special thanks also to Principle Adams, Mr. Dean, Mr. Stewart, Mr. Albani, Brother Tom, Brother Pat, and the rest of the teachers, staff, counselors, and parents at DeLaSalle.

The hardest part of this decision was choosing to leave my teammates, friends, and classmates.  All the success that we have shared I will cherish forever.  Although I am moving on to a different place I will always be a Pilot at heart and these friendships and memories will last a life time.