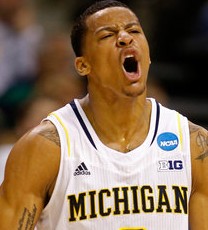 His game has been honed for this moment since he was a sophomore in high school. Burke has been thinking about the draft, about where he’ll go, about the next stage of his life, almost daily.

“It gives me goose bumps, really,” Burke said the next day, after an appointment with a chiropractor.

Burke could become the highest draft pick from Columbus, Ohio, since Antonio Daniels went fourth overall in 1997, and the highest pick out of Michigan since Robert Traylor went sixth in 1998. In preparation, he has worked out twice almost every weekday, training with the same man who got him ready for his two-year college stint, Anthony Rhodman.

As he completes the metamorphosis to the pros, Burke has kept his circle tight. His representation is, literally, family. His trainer, Rhodman, has worked with him for five years. One of his main sounding boards, Ronnie Steward, is almost like family.

“It’s not even a circle,” Burke’s father, Benji, said. “We call it ‘keeping a dot.’ We don’t want anybody outside that we really don’t know.