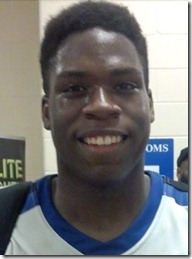 When Noah Dickerson was 10 and 11 years old growing up in New Jersey, he remembers his mother holding a select few colleges especially close to her heart. One of those schools was based quite a ways west from his home: the Michigan Wolverines.

“We would always talk about schools around the house, and one of them was Michigan. She loved that school,” Dickerson recalled. “It was one of her favorite schools growing up as a kid. She just kept it around the house. She used to hang up Michigan posters and things like that.”

As a result, Dickerson said, he developed a fondness for the Maize and Blue, as well.

“It just gradually became one of my favorite schools.”

How fitting, then, that as the 6-foot-8 former football standout makes a name for himself on Nike’s EYBL circuit this summer, Michigan would come calling. Dickerson, a class of 2015 prospect, is averaging 14 points and four rebounds per game playing almost exclusively for the 17U Georgia Stars. Although his team has had an up-and-down summer, they are still 6-3 in the EYBL and the Atlanta-based big man is making a name for himself with his physical play and versatility.

Dickerson said he needed to acclimate himself at first to the rigors of playing in the premiere Nike league.

“This was my first time ever playing in the EYBL, so I was really unfamiliar with how it was going to be,” Dickerson said. “The first couple of games I wasn’t doing so well, but then I started to understand how the game was played and what I can do to be a dominant player in the league. So I started to gradually get better.”

Get better he did. Dickerson has garnered attention from most southern schools, holding offers from Tennessee, Virginia, Auburn, Marshall, Georgia and Georgia Tech. However, schools who have shown interest are more spread across the country — Ohio State, Michigan, Texas and Georgetown have all contacted Dickerson but are yet to offer.

The standout forward said he plays with a mixture of physicality and versatility, valuable assets in big men that often aren’t both seen in one player.

“I’m a power forward. I use my body to bully my way into the paint. But since I’m big, I know a lot of big guys won’t want to guard me on the perimeter so I can shoot and shoot consistently,” Dickerson said. “I’m just about doing different things on the court to help my team win.”

All of this sounds good to Michigan, who recently reached out to Dickerson through Jeff Meyer. Dickerson said in the course of his discussions with Meyer, they have talked about the leaps and bounds Mitch McGary was able to take over the course of just one season under Michigan coaches’ tutelage.

Dickerson said knowing he will get better under his coaches is one of the most important aspects of a program he would consider.

Dickerson said he would like to get into contact with Michigan assistant Bacari Alexander, who deals primarily with Michigan’s big men, and he should have that opportunity at Michigan’s College Practice camp on June 1st. Dickerson confirmed that he plans to attend Michigan’s Camp, getting his first taste of campus in Ann Arbor, along with Elite Camps at Virginia and Tennessee in the coming month.

It appears Michigan is simply reciprocating interest that Dickerson has held in the program since he was young. Dickerson said he has watched the Fab Five documentary released a few years ago “about 12 times”. He’s also not opposed to playing his college ball in a cooler climate.

“I like the snow. I know that sounds kind of weird, but I grew up with snow,” he explained. “I love the snow, I can’t stand the heat. It’s up north. My mom lives down in the south, but most of my family lives up north. It’s easy for them to come to games and things like that.”

But at the end of the day, it’s Michigan’s tradition that has Dickerson’s attention.

“Michigan has such a rich history and they’ve been such a great program,” Dickerson said.