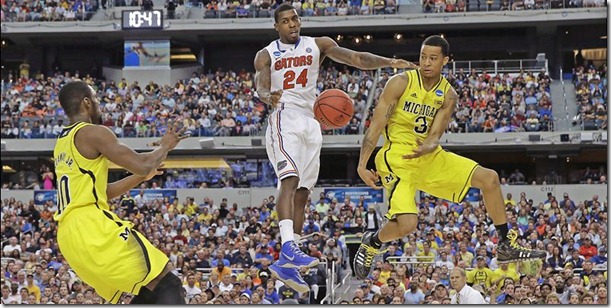 With the NBA Draft order set in stone after last night’s lottery, the NBA Draft picture is slowing coming into focus. With just over a month until the June 27th draft, Trey Burke and Tim Hardaway Jr.’s draft stock continues to improve and the duo could be the first pair of Michigan players to go in the first round since Jalen Rose and Juwan Howard in 1994.

Trey Burke didn’t participate in drills at the NBA Draft Combine or post any sort of eye popping measurables but there’s little doubt he’s the top point guard in the draft. While there were whispers last week that Burke could be a potential No. 1 pick, that talk was put to rest as the Cleveland Cavaliers landed the No. 1 spot in the lottery. However, Orlando (2), New Orleans (6 ) and Sacramento (7) are three teams that would strongly consider drafting Burke and it would be surprising if he fell past seventh overall.

Tim Hardaway Jr. was one of the stars of the combine – impressing with his vertical, bench press, shooting ability and everything in between – and his stock is pushing toward the first round. About half of the prominent mock drafts have Hardaway slotted as a late first round pick while the others have him in the first half of the second round.

After the jump we round up all of the top NBA Mock Drafts with assorted notes and quotes from various analysts.

“The Magic need a point guard but might have been reluctant to take Burke at No. 1. What about No. 2? I think there’s a good chance. He’s a bit small for his position, but Orlando needs a leader, someone with moxie, and Burke seems like the best fit. Ben McLemore is a possibility here, too.”

“Trey Burke, PG, Michigan: I know New Orleans likes Greivis Vasquez, but Trey Burke would be an upgrade at the point guard spot. He can shoot, pass and is lethal in the pick and roll. (Previous: 4)”

“No chance New Orleans passes on Burke. Austin Rivers showed he is not a point guard, and if given the chance to take Burke – who had an outside shot at the top pick – the Pelicans will rush the stage on draft night. With Rivers and Eric Gordon, the Pelicans are deep at shooting guard and can even entertain trade offers for Gordon, who is signed to a massive extension.”

Nik Stauskas, an NBA junkie in his own right, likes the idea of Burke heading to the Magic.

Hope my man Trey goes to Orlando with the #2 pick. That would be a good look for him!

About half of the mock drafts out there have Hardaway sneaking into the first round including ESPN and NBA Draft.net. Hardaway has played well and should have plenty more opportunities to impress as he earns workouts over the coming month. Hardaway tied for third in the bench press at the combine, repping 185 pounds 16 times.

Hardaway had one of the best performances of anyone at the combine. Not only did he shoot the ball well, but he brought an intensity with him that few players could match. While the Nuggets have both Andre Iguodala and Evan Fournier at the position, the team needs as much shooting as it can get.

“Would give Cleveland a long wing who can shoot the ball — which is a need in the organization. (Previous: 42)”