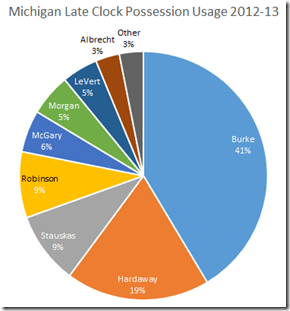 Trey Burke’s time in Ann Arbor is over and it won’t soon be forgotten. His impact as Michigan’s point guard was obvious. He dominated the ball, scored, created, and defended. Burke was the National Player of the Year because of his impressive statistics. He was a winner and carried Michigan to heights it hadn’t seen in 20 years. There is no shortage of numbers to prove how great Burke’s sophomore season was.

We know about Burke’s production but there’s one element of his game that shouldn’t be overlooked – or at least hasn’t been quantified – his ability to create late in the shot clock. According to Synergy Sports, Burke was the most productive late clock player in the Big Ten. He used 53 offensive possessions with less than four seconds remaining on the shot clock (more than any player in the league) and scored 1.097 points per. He was also the 10th most efficient late clock player in the league – an impressive feat considering only one of the nine players better than him used more than 17 late clock possessions.

Trim that list to players that used at least 20 late clock possessions last and you are left with an impressive group of guards but also a list that Burke clearly dominates.

Keep in mind that only seven Big Ten players that used at least 24% of their teams’ possessions had an offensive rating (estimated points per 100 possessions) over 100. Extended over 100 possessions, Burke’s late clock efficiency would rank 7th best in the Big Ten among higher usage players.

Because of Burke’s effectiveness, it should come as no surprise that Michigan ranked favorably in the league in terms of late clock offense.

That was good news last season but now it’s something for John Beilein to ponder all summer. The Michigan head coach loses his dependable late clock options next season without a proven replacement.

Michigan loses its primary late clock guys and there’s not an obvious answer to replace them. Dealing with fewer than 13 possessions, sample size wreaks havoc on the available data. Mitch McGary’s .286 points per possession are as useful as Spike Albrecht’s 1.5 points per possession.  Nik Stauskas and Glenn Robinson III both used fewer than 15 late clock possessions despite playing heavy minutes all season. Not to mention that the majority of both players’ late clock opportunities were set out-of-bounds plays or assisted – usually by Trey Burke.

Most teams know who is going to handle the ball late in the clock and while it’s not always the point guard, it’s someone that can put the ball on the floor and create his own shot. . Michigan doesn’t just lose that guy, it loses arguably the best player in the country at creating in late clock situations. The Wolverines also lose their No. 2 in Tim Hardaway Jr., meaning they lose 60% of their late clock usage from a season ago.

Late clock possessions are still a small part of the game, just 4.4% of Michigan’s offensive possessions ended with under four seconds on the shot clock. Roughly 5.3% of Michigan’s half court sets (128 of 2412) boiled down to a shot with less than four seconds remaining which equates to three or four possessions per game. But in close games those possessions can be critical and John Beilein will be relying on a new face to takeover.

Derrick Walton and Spike Albrecht are potential options at the point guard spot. Zak Irvin and Nik Stauskas both have the skillset to create from the wings and Glenn Robinson III is hoping to expand his offensive skills on the perimeter. All are viable options but the majority of them are either unproven or more comfortable in supporting roles. The ability of one or two players to emerge as a consistent, reliable late clock isolation threat will be one of the first critical questions for John Beilein to answer.

(Thanks to KJ, who unknowingly inspired part of this post)