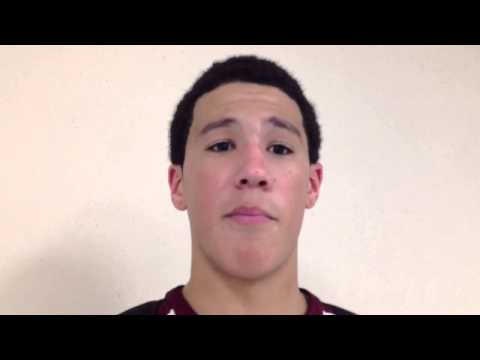 The final regular season session of the Nike EYBL took place over Memorial Day weekend in Minneapolis as teams battled for the final spots in the Nike Peach Jam. While the session wasn’t open to college coaches, the chance to play at the prestigious Peach Jam event in front of top head coaches during the July evaluation period served as a motivator in the tournament’s fourth session.

Find a handful of recruiting updates, scouting notes and big performances after the jump including a triple double from a future Michigan visitor.

Booker is a high-level shot maker and will be a candidate for a spot in the McDonald’s All-American game next season if he continues to play like this. Lethal from the perimeter, Booker lets it fly in any situation and has one of the best perimeter strokes in all of high school basketball.

Winslow did it all for Houston Hoops and because of their supreme depth on the wing, Winslow showed his jack-of-all-trades ability. Winslow defended, rebounded well in traffic, finished at the rim and defended multiple positions.

Houston Hoops Justise Winslow is impressive to watch. Winslow ran much of the point duties for Houston, and at 6-foot-6, 210 pounds he’s physically imposing on the smaller guards. Winslow is the rare type of basketball player that has the size and skill set combination that allows him to play multiple positions.

Devin Booker updated his recruitment with ChicagoHoops.com in the following video and explained what stands out about Michigan.

Booker also hit on the other heavy hitters involved in his recruitment including Kentucky, Michigan State, Missouri, North Carolina and Duke in the video interview.

Booker made it clear that trust with the coaching staff will be at the top of the list when he goes to make a decision but that process is a long ways off, noting that he hopes to begin to trim things down before his senior year.

Chicago Hoops also caught up with Elijah Thomas who rattled off a lengthy list of suitors, including Michigan, and Kameron Chatman who will visit Michigan next weekend.

Chatman also reported an Oregon visit is in the works and that he hopes to visit Arizona later this summer. Oregon the weekend after Michigan and sometime this summer visiting Arizona.