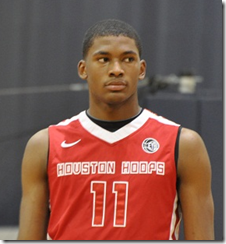 Michigan is already involved in the recruitment of a few high-profile 2014 players – Devin Booker and Trevon Bluiett are two of many that come to mind. In the cases of Bluiett and Booker, Michigan was recruiting both early on in their prep careers, only to find the Dukes and Kentuckys of the world wade in later in their recruitment.

But in the case of class of 2014 wing Justise Winslow, Michigan is the late arrival into a high-profile recruitment.

Some of the top schools going after Winslow include Duke, Kansas, Florida, UCLA and Arizona. And Michigan has joined that company, hoping to secure a spot on his soon-to-come trimmed-down list.

“About three weeks ago (Michigan) reached out to me,” Winslow told UM Hoops in Minnesota. “I’m pretty open right now so I’m giving them a chance, but I think people will get a better idea about my recruitment in a couple weeks when I release my list.”

If Michigan ends up on that list, it would be in the running for one of the nation’s top talents. Winslow is a top-10 player nationally and has been excelling on the EYBL circuit this spring.

Averaging 14 points, four assists and seven rebounds per game, Winslow has helped Houston hoops to a 16-2 record and a bid to the Nike Peach Jam. Winslow, a 6-foot-6 lefty, has the quickness to take his defender off the dribble and the size to force his way inside and create opportunities for himself and teammates.

“My passing game is doing well, but I can improve on everything,” Winslow said. “Post up game when I’m guarded by a smaller defender. But, mostly my ball handling (is what I’m working on).”

Winslow, who wants to play the two guard in college, is working hard on improving his perimeter ball handling as well as his 3-point shot. Once both of those skill sets catch up to the rest of his game, watch out.

He already has the physical talent – something that comes naturally in his family’s lineage. The 6-foot-6, 212 pound guard’s family is laced with athletic ability. His father Rickie played collegiate basketball at Houston and was drafted by the Chicago Bulls and his older brother Rickie plays football at Dartmouth. Winslow could see himself on the gridiron

“I’d probably be most effective at wide receiver or tight end,” Winslow admitted. “But the position I would want to play would be safety. I like to hit people.”

Michigan coaches were undoubtedly drawn to Winslow’s rare combination of skill and physicality when they jumped into his recruitment. Michigan assistant coach Bacari Alexander has been Winslow’s primary recruiter during the short time the two have been in contact.

“I talked to coach Beilein once, but mainly I’ve been talking to coach Alexander,” Winslow said. “He just talks to me about the family environment. They’ve really been doing well the past couple of years. They way they develop their players like Trey Burke.  And just the good academics at Michigan.”

Wherever Winslow decides to go, he won’t be keeping schools waiting too much longer and Michigan won’t have a lot of time to play catch up. Winslow plans to trim his list to “probably five or six” schools in a “couple weeks” and will begin to work toward a decision – ideally in the early signing period.

“I’m definitely trying to sign in the November period,” Winslow said. “I haven’t decided yet when I’m going to take my official visits in the fall, but that’s something I’m working on.”

J.B. Bauer contributed to this report.