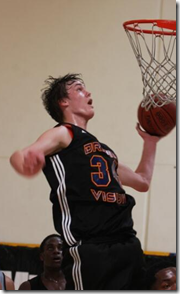 Memorial Day weekend was a busy one on the circuit, here are a number of scouting reports, quotes and videos from around the internet.

We posted our final Class of 2013 Big Ten Recruiting Rankings last week and the always reliable RSCIHoops.com also updated their consensus top 100. Two Michigan targets made the top 100 – Zak Irvin at No. 29 and Derrick Walton at No. 44.

Notes on Kevon Looney, Diamond Stone, Stephen Zimmerman and a host of other top Wolverine prospects after the jump.

Looney updated his recruitment with Evan Flood of 247 Sports and NY2LA Sports and spoke on a number of his top schools in this video interview.

Looney has yet to officially trim his list but continues to mention the Wolverines are part of his top group. UCLA and UConn have entered the mix but Looney continued to say good things about the Wolverines.

Looney didn’t just update his recruitment in Texas, he also impressed on the court.

Looney used his size, 6-foot-9, and high-level athleticism all weekend to impact the game on the glass and on defense, and he focused on his perimeter skills to score on offense. Looney handled the ball more than he usually does on a Runnin’ Rebels team that has strong guard play, and he shot from deep more often and much more efficiently than we have seen him do in previous events this spring.

The five-star prospect didn’t have a ton of new information about his recruitment to share; however, he mentioned Connecticut and UCLA as new schools that he’s adding to his list. He denied rumors that he is a strong Duke lean.

Here’s footage of Looney in action from the weekend.

Stephen Zimmerman had a big weekend at the Magic Memorial Tournament in Corona, California over Memorial Day weekend.

Standout performer: Stephen Zimmerman (Las Vegas/Bishop Gorman), a 6-foot-10 sophomore center, continues to show why he is considered one of the top five prospects nationally in the Class of 2015. The rangy left-hander is multi-skilled, has savvy beyond his years and is very athletic. He can knock down 3s, face up his defender, and attack or deliver a number of high-level passes. Despite his already-impressive offensive arsenal, two other areas stood out at the Memorial Day Festival: his improvement on the defensive side of the floor and his willingness to compete no matter the score. After his team failed to win a game in pool play, Zimmerman put his Dream Vision squad on his shoulders and led it to the championship game before losing to Compton Magic Elite.

We profiled class of 2015 big man Noah Dickerson last week and the Georgia big man, who plans to attend Michigan’s College Practice Camp on Saturday, had another big weekend in Minnesota. ESPN’s Reggie Rankin watched Dickerson in Eagen over the weekend.

Offers: Auburn, Virginia, Georgia, Georgia Tech and Tennessee
Interest: Michigan, Georgetown, Texas and Arizona
Dickerson is a wide-body post who will seal and pound his opponents for low-post scoring position where he features a nice post package led by his baseline spin. Dickerson is a strong finisher at the rim as he’s virtually unstoppable once he gets a full head of steam. He pulls down rebounds in his area and simply wears down his opponent with his physical and aggressive approach.

ESPN’s Paul Biancardi watched Diamond Stone with the Young Legends this weekend and liked what he saw.

He is special at a young age because out his terrific set of hands, great touch around the rim along with range to make jumpers from the arc. His demeanor will enhance his development because he cares about his performance and his teammates. Playing and dominating Under 16 competition with some triple-doubles, it’s now time for Stone to compete at the Under 17 level.

Rivals.com reports that Stone’s recent improvement has been driven by a commitment to get in shape.

He’s been running more, eating better and playing more basketball. All of it has helped him get up and down the floor quicker, and helped his already-good flexibility.

“I’m working hard to get to the next level,” Stone said. “I’ve just been working constantly with my team.”

Next up for Stone is to add some muscle mass and get stronger in the paint. Maybe even get taller, too.