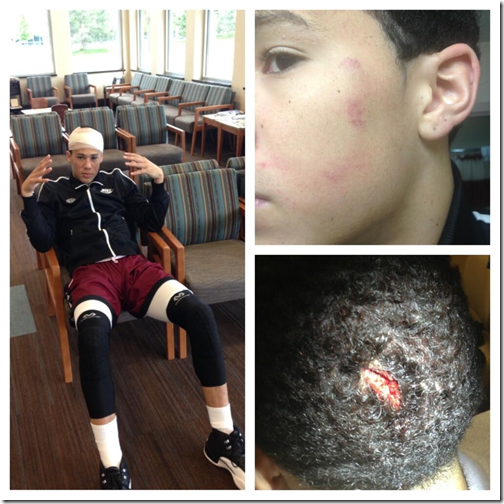 J.B. Bauer was in attendance at Session Four of the Nike EYBL to provide coverage special to UM Hoops. Read his scouting thoughts on several Michigan targets throughout the weekend below.

Vince Edwards – I was really impressed with his work on the boards this weekend. He came into the weekend averaging seven rebounds (2.3 offensive) per game so his eight rebounds per game average wasn’t extraordinary but it was consistent. He had at least seven rebounds in every game and that was important with Jae’Sean Tate sidelined for four games with a shoulder injury. Edwards also had two five offensive rebound games.

In All Ohio Red’s win over ICP Elite and fellow Michigan target Kameron Chatman, Edwards had 27points, eight rebounds, four assists and he was critical to cementing the victory. With All Ohio Red leading 59-58, Edwards had a put back plus the foul with 10.3 seconds left. He knocked down the free throw to ice the 62-58 victory. It was a huge play – and one that was pivotal in locking down a Peach Jam spot for All Ohio Red.

Devin Booker – After he suffered the nasty head injury, he wanted to get right back in. He was sitting on the bench looking like a mummy with an ice pack wrapped to the back of his head and he was still totally involved in the game (an overtime win). Every time out, he was the first one hopping off the bench to meet his teammates. I almost wanted to say, ‘son, you gotta chill.. slow down!’.. Tough kid. That game ended a little after 10:30 a.m. and of course he was back on the court for the next one at 3:30 p.m. and tallied 18 points, five rebounds and nine assists in a 70-56 win.

Trevon Bluiett – Bluieitt was ridiculous. He and James Blackmon were unstoppable for much of the weekend. Trevon was doing everything – scoring at all levels. The outside shot was pure, but he was mixing things up inside as well.  Physically he’s so solid and big.

Sunday morning in a 68-67 win over the St. Louis Eagles, Bluieitt had the game winner with a couple of seconds left on the clock. His scoring was sensational that game, but also there was a sequence where he fired an absolutely beautiful 3/4 court pass right on the button to a streaking Trey Lyles. Lyles missed the shot and the Eagles pushed it back the other way before Trevon put on the afterburners and races back to swat the layup attempt from behind.

Justise Winslow – Winslow is a very smart basketball player. He does it all, yet doesn’t try to do too much. He can score and earn time on the highlight film, but he’s also an excellent passer.

In USA basketball as well as running with teammates like Justin Jackson and Kelly Oubre, Justise has shown he can be a star without being a high volume shooter. At times he’ll bring the ball up the court for Houston Hoops, but in college he’ll play the two. In Houston Hoops’ 77-64 win over Malachi Richardson and Team Final this weekend, Kelly Oubre and Justin Jackson accounted for 28 of the team’s 56 field goal attempts despite playing just a combined 45 minutes.  Winslow played all 32 minutes and scored 14 points (10 FGA). More importantly, he had 13 rebounds (9 offensive) and 6 helpers.

He stuffed the stat sheet all weekend. He’s a tough, physically imposing player and as a two guard in college will be a match up problem for most teams. Very controlled, intelligent player. He threw down some vicious dunks and made athletic defensive plays throughout the weekend, but it’s his overall basketball IQ and versatility that might be most impressive.

Elijah Thomas – When he’s on you can forget about stopping him. At his best, Thomas is an exceptional talent. He can get wrapped up in the moment at times and shows his frustration when things aren’t going well. However, when he and his team are having success he’s got an extra spring in his step on both sides of the floor. Thomas is always capable of hurting the other team when he’s got the ball down low, but when he’s making passes and defending at a high level he’s that much more fun to watch.

He went up against some big defenders this weekend and again showed off a nice touch. What’s especially nice about Thomas is his ability to use both of his hands to score. He seems very committed to working on his strength and conditioning which will pay big dividends. His array of moves around the basket will keep progressing. With some added consistency to his on court performances he should be one of the top big men in college basketball in two years. Capable of being a dominant star player.

Jalen Brunson – Brunson suffered a cut near his eye on Saturday which kept him out for a couple of minutes before he was back on the floor. He’s a complete floor leader when he’s on the court and does a good job facilitating to his talented team. Jahlil Okafor went out in the first game of the weekend with an ankle injury and sat for the rest of the weekend. Big Cliff Alexander was exceptional this weekend. Brunson racked up assists to Alexander and Josh Cunningham with passes ranging from simple entry passes into the post to highlight alley-oops.

He played smart and in control. He’s a capable scorer but it was a great weekend for him setting up his teammates: 37 assists to just nine turnovers with three games of nine or more assists.

He doesn’t wow you if you just give him a quick first glance – not physically big and not quite as athletic as some other guys. But if you watch him for a little while it becomes apparent he’s a high level floor general – nice kid to have running your team.

Kameron Chatman – I hadn’t seen Chatman much in the past; he certainly belongs in the discussion with some of the other top players in the EYBL. If he adds strength and an improved outside shot he could develop into a big time college player.  Versatility is what you see with him – he’s a ‘switchable’ player that can do a lot of things on the court and can guard multiple positions. He impacts the game in a lot of ways and his length is a great asset which he uses well on the glass.

He competed at a high level against both Howard Pulley and All Ohio Red this weekend. His scoring, passing rebounding were all solid and he just didn’t make a lot of mistakes. Saw him finish through contact a couple of times. One of those kids who is going to be good, but could be great. Has the look of someone who can raise his stock over the next year… smart player whose game should progress well.