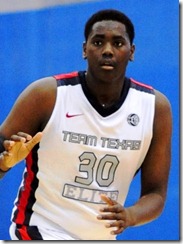 When Elijah Thomas was in seventh grade, he stood a gigantic but relatively immobile 6-foot-5, 275 pounds. In fact, his future seemed to lie either in football or academics — pretty much anywhere other than the basketball court.

But Thomas wouldn’t hear of it. Now, as a rising junior in the class of 2015, Thomas has made himself into a veritable terror on Nike’s EYBL circuit playing for Team Texas Elite. The Rockwell, TX native is now a sleek 6-foot-9, 235 pounds and a major force for Texas Elite, averaging 16 points and eight rebounds on the Nike circuit.

The five-star big man’s production, and his story, has drawn the recent interest of Michigan’s coaching staff. Thomas explained to UM Hoops what the Michigan coaches like about his game.

“They like me because I’ve got a chip on my shoulder, because when I was younger I wasn’t as good,” Thomas said. “I transformed my body, I got in shape. I started lifting; I added a lot of athleticism. Being skilled to be able to shoot with both hands. You know, that’s the type of player they like. Scoring, a little bit of grimy and most of all a leader.”

The interest appears to be mutual. Thomas recently told the Detroit News he has enjoyed watching Michigan basketball throughout the John Beilein era, even before the team made its run to the national title game this season. For Thomas, he sees himself in the way many of Michigan’s players go about their business.

“I’ve always been a Michigan fan,” Thomas told the Detroit News last week. “My best friend used to always have me watch them. He was like, ‘These guys are good.’ I started watching them and I was like, ‘Dang, they ain’t bad.’ This was around ninth grade. This year they just blew up. They finally got a couple of players who are similar to my game and skill — (that are) grimy, like to play, and have just overall a killer scorer’s mentality like Carmelo Anthony and Kevin Durant. I liked that a lot. That blew my mind. I was like, ‘Dang, that’s what I like!’

“Coach (Beilein) has a system, but if players can score, he lets you play. I like that a lot.”

More specifically, a player on Michigan’s roster he looks up to is Mitch McGary, a big man who went through a transformation of sorts this season and ended up emerging as a dominant force in his own right. What impressed Thomas about McGary was his toughness.

“You know Mitch, he’s a real hard worker. He dang near cut all his skin up at the Boost Mobile [Elite 24] game and he still wanted to play,” Thomas recalled. “He’s a warrior. That’s the type of players they like up at Michigan so that was an awesome fit for him. They gave him playing time and let Mitch do his thing and he showed up, so that’s real good.”

Another similarity between the two bigs is the fact that they both may look back occasionally at the football career that could have been. Thomas said he experiences flashes of that — “I probably miss it a little bit, but not too much,” he says — but his success on the basketball court has allowed him to stay focused.

And it’s precisely those skills he learned back when he was an overweight middle schooler who looked more like a football player than a basketball player that he’s using to dominate the paint this summer.

“That’s the fun part. Some big men are real tall and they’ve got skills, but don’t know how to use their body. That’s something I worked on before I lost weight, so I’ve always had that (ability).”

J.B. Bauer contributed to this report.