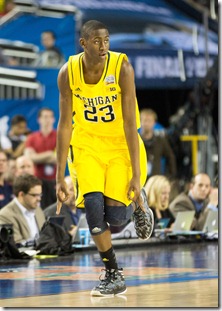 Tim Hardaway Jr. thinks that needs to change. Hardaway discussed LeVert – his backup last season – in an ESPN.com podcast and called the slender rising sophomore the “X-factor for the Wolverines next year”.

“I think he grew an inch or two this past (stretch), and they plan on him being 6-8, 6-7 1/2 — he’s not done growing,” Hardaway said. “He was 18 toward the end of the season. (He’s going to be an) athletic, defensive guy who can grab rebounds, push it on the break and knock down wide-open threes and take it to the rack if he wants to.

This is great news for Michigan fans who saw LeVert sporadically last season. The Pickerington, OH native displayed flashes of real talent but was often overwhelmed physically because of his slim frame. While LeVert showed enough promise for the Michigan coaching staff to burn his redshirt, his production wasn’t consistent.

Now, it appears LeVert is working hard to add weight and is also still growing. If this continues, there is little doubt he’ll be a threat on the perimeter next season. Bacari Alexander, Jeff Meyer and LaVall Jordan were featured on WTKA 1050’s Michigan Insider Program to provide an offseason update on the Wolverines. Alexander provided an update on LeVert’s development and set the record straight about his height.

“With Caris Levert, you’re talking about a young man who is the ultimate gym rat. He spends an enormous amount of time in the gym working on his skill set and refining what he does,” Alexander said. “I’ll give him 6-foot-6 and a half, to temper everyone’s enthusiasm, but he’s doing a great job of adding on the pounds. When he walked through the door he was probably 6-foot-5, 162 pounds. Throughout the season coach Sanderson and his staff did a wonderful job of adding more weight on him. He got up to about 6-foot-5 and a half and 185 pounds. We’re hoping to get him in the 195 pound range going into next season. He’s working diligently towards that.”

With the departure of Trey Burke for the NBA Draft, Michigan finds itself in an eerily familiar point guard limbo.

When Darius Morris left for the NBA after his sophomore season in Ann Arbor, Michigan knew it would have to rely on Burke, then an incoming freshman, to lead the team. Burke developed into the best player in the country in two seasons.

Now, the Wolverines find themselves again with big shoes to fill at point guard, and an incoming freshman who, by all accounts, is ready to embrace the challenge. LaVall Jordan told WTKA that watching those who came before him will help Walton do just that.

“Derrick Walton will play Michigan basketball, which is what Trey Burke did as a freshman,” Jordan said. “He’ll have a good idea, because of the guys that came before him, of what that is. Our guys will educate him as he gets here. He’s a kid with a high skill level on the way in.”

Jordan referred to Walton as “Spike (Albrecht) on steroids,” which isn’t the best news for Michigan’s rising sophomore and Walton’s main competition for playing time at point guard. Walton has an advantage because of his vision, quickness and impeccable handle.

“Derrick can really handle. He has great vision,” Jordan said. “He’s like Spike on steroids, the way that Spike sees the game and kind of has a fearlessness about him and can handle and make plays for others and put the ball in positions where guys don’t have to work hard to finish the play.”

However, as is true for most freshmen, Walton’s most difficult transition will be on the defensive side of the ball.

“He’ll have to be able to execute defensively, which is probably the biggest challenge for any freshman coming in,” Jordan said. “The speed of the game picks up, the speed of the athletes picks up. So that’ll be an adjustment.’

Now, both players are hard at work to prove to their coaches they’re ready to take on those new roles. Bacari Alexander elaborated on McGary’s transition in particular and what held him up last season:

“The baseline level for McGary … is valuing the ball. If you look back statistically at Michigan basketball, we did a great job last season of taking care of the ball. One of the things that kind of stunted the progress of that migration plan for Mitch going from the five to the four spot was his inability to make the proper basketball decision with the ball,” Alexander said. “As he showed a maturation and an understanding of shoot it when you’re open, pass it when you’re not … make accurate passes and balance and things of that nature, now we can entertain the notion of having that migration plan that we originally planned for. In addition to that, increasing his shooting range is going to be something that’s valuable asset for him”

Another thing Alexander mentioned as important to McGary’s transition was defense.

“A not so much talked-about aspect of making a position change is what you do defensively. You have to have the ability to recognize switching situations if we’re switching one through four, you have to have keep a guy about 3 feet in front of you, without allowing north-south penetration — all of the ingredients that go into the development of a player,” Alexander said. “But the last part of things too is when they go home in the spring and summer, rising to the challenge of working on those things that we identified in the spring and even in the season. Then when we show up in June, you have an opportunity to show us what you actually improved upon. My challenge to Mitch McGary in particular is show us the money before we let you migrate to the next position.”

According to LaVall Jordan, the big question regarding the advancement of Robinson is whether or not he can fill the role of playmaker rather than simply play finisher.

“Becoming more sure with the ball and more confident as a playmaker as much as a finisher,” Jordan said. “You had Trey and you had Tim last season to help make plays for others. Now next season, moving forward with those guys gone, who’s the guy who can make others better?”