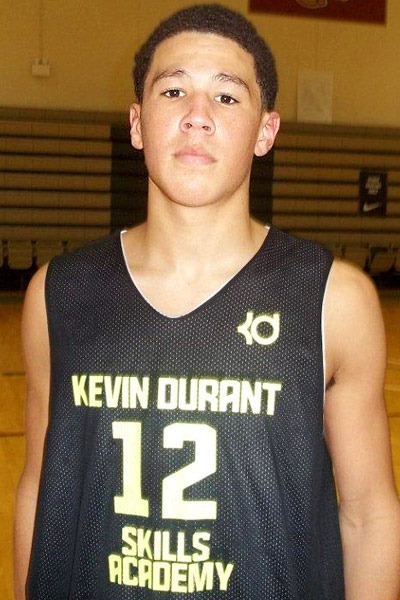 We’ll have full scouting reports from College Practice Camp in the hours to come but here are some quick notes from camp.

Throughout Michigan’s College Practice Camp on Saturday, Devin Booker showed all in attendance why he is at the top of Michigan’s wish list for the class of 2014.

It’s a joy to watch Booker in Michigan’s shooting drills where he’s smooth, efficient and consistent but his talent was on full display during the five-on-five scrimmage portion of the camp. Booker already has offers lined up from a laundry list of college basketball’s elite, but he played like his basketball career hinged on impressing Michigan’s coaches on Saturday. Booker dove for every loose ball, played suffocating defense and consistently stepped up when it looked as though his team would take a loss.

They didn’t, by the way. Booker’s team was undefeated on the day.

The Moss Point High School standout is known for his ability to score, and he did plenty of that. He showed off his range on numerous occasions, at one point crossing up his defender and hitting a contested step-back three a la Allen Iverson. But Booker’s game is about much more than just scoring.

His athleticism was impressive, as he was able to slam home a two-handed baseline dunk in traffic, along with a number of other flashy finishes on the fast break. His rebounding was phenomenal all day. Booker never gave up on a ball and was willing to bang with bigger and stronger post players, namely 6-foot-7 248 pound Noah Dickerson, throughout the day — remember, he’s a wing prospect.

Booker was definitely the most talented player at camp, but he didn’t play with anything resembling a sense of entitlement. He came to play and was the best player in attendance.

Devin Booker was the camp MVP but he wasn’t the only high profile recruit to answer the bell in Ann Arbor on Saturday. Kameron Chatman, Hyron Edwards,  and Cassius Winston all had big days in their respective classes.

Chatman’s team struggled a bit, relegated to the secondary court in the Crisler Center, but his talent and potential is obvious. At 6-foot-7, the left has a smooth handle and incredible court vision and passing ability for a player of his stature. He shot the ball pretty well in drills but didn’t find his range in five-on-five play. Chatman threw three or four great three-quarter court passes for easy baskets and looked every bit like a legitimate point forward for his team. He’s still very skinny but it was obvious why he’s expected to add a Michigan offer this weekend during his visit.

Hyron Edwards ran the fast break to perfection and played at an all-out pace whenever he was on the court, displaying his athleticism and quickness getting up and down the floor. He consistently found the open man and got easy buckets for his teammates. Edwards didn’t do much in the way of scoring, but he excelled in the role of facilitator, playing confident and directing his teammates in the midst of some especially chaotic scrimmages.

Cassius Winston was the most impressive guard in the morning session of camp for underclassmen. His jump shot has a bit of a leg kick but it can be effective in spurts. At one point in drills, he hit nine long jumpers off the catch in a 30 second drill – forcing John Beilein to do push ups.

Bacari Alexander had an impressive crop of big men to work with on Saturday as a number of impressive post players were in attendance. 2014 commitment Ricky Doyle made the trip up from Florida but he had plenty of competition. Doyle has an incredible wingspan and an impressive array of moves on the low block. He started out five-on-five scrimmages with a bang, scoring a couple times around the bucket and then catching a drop off pass from Prentiss Nixon for a big dunk in transition. Doyle’s team spent the majority of the day on the winners courts on Saturday.

Georgia big man Noah Dickerson was physically dominant at times and played well throughout camp. He is a bull that uses his physicality first and foremost but he showed off some ball skills as well, even though he’s still learning what he can and can’t do. Nate Fowler, although not as dominant as others, was also impressive with sound footwork. Justin Tillman is more potential than production at this point but added athleticism to the impressive mix of post talents in the afternoon session.

In the morning session for underclassmen, Caleb Swanigan, a two-sport prospect from Fort Wayne, and Barret Benson from Hinsdale, IL impressed on the low block. Both have great size for their age, but Swanigan is built like an offensive lineman (because he is one, he’s a high major offensive tackle prospect) at 6-foot-8 and 260 pounds; Benson is as tall but weighs in at a lighter 240.

While the two faced off against each other briefly during 5-on-5 scrimmages, they were mostly separated for the camp. Swanigan was the more impressive prospect, and one of the most impressive prospects at camp overall.  Swanigan’s size makes him almost unstoppable, and he’s a very active rebounder with great tough around the basket. Benson’s footwork is good and he has a midrange jumpshot but Swanigan was dominant at times. They are different players, but the comparison is inevitable at their sizes. Swanigan was consistently impressive while Benson showed flashes of talent.

Joe Stapleton and Dylan Burkhardt contributed to this report. Stay tuned for much more from Michigan’s College Practice Camp throughout the weekend.