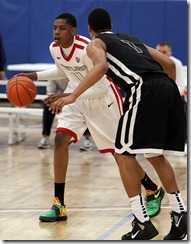 Class of 2014 wing forward Kameron Chatman confirmed initial reports that he added an official offer from Michigan coach John Beilein on his unofficial visit to Ann Arbor this weekend.

Chatman was expected to receive an offer on his visit and backed up his lofty top-40 ranking with an impressive performance at Michigan’s College Practice Camp on Saturday.

Chatman, a 6-foot-7 forward from California, also holds offers from Arizona, Connecticut, Oregon, UCLA and Washington among others. He is also planning  unofficial visits to Oregon and Arizona in the coming weeks.

Watch for more from Michigan’s College Practice Camp in the hours to come.