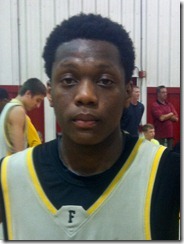 The Saturday morning session of Michigan’s College Practice Camp featured underclassmen in the 2016 and 2017 graduating classes. Here are some notes on players that caught our eye.

Cassius Winston (2016 PG, 6-foot) – Winston stole the show during the morning session on Saturday and proved he was the best guard of the crop camping at the Crisler Center. He started hot, making nine of 10 threes during shooting drills at one point, forcing John Beilein to drop and give some push-ups. Winston’s shot has a definite leg kick to it, but it just goes in, and on Saturday it went in with alarming consistency throughout the morning. Winston has a very confident game all around, playing good defense and passing well. He simply has an awareness of where to go with the ball that is very advanced for his age. At 6-foot, Winston is considered a point guard, and makes enough correct decisions for that to make sense. That being said, his strength during Saturday’s camp appeared to be scoring. He created his own shot time and again in the mid-range and got to the basket at will. The Detroit native worked hard all morning and it showed with one of the best appearances at camp.

Caleb Swanigan (2016 Big, 6-foot-8) – Swanigan’s most obvious strength is his size. At 6-foot-8, 260 pounds he has the build of a kid who could play either in the post on the hardwood or in the trenches on the gridiron. But it’s not just his size that makes him so effective — Swanigan displayed a high level of activity and intensity throughout the morning session. He crashed the glass and combined that effort with excellent touch around the basket to get much-needed tip-ins and offensive rebounding opportunities for his team. The only time I saw him make a post move was a nice drop-step for a dunk, but other than that most of his points came from dump-offs and second-chance opportunities. Swanigan had a tendency to settle for jumpers when he received the ball outside the post, which just isn’t in his repertoire right now. His footwork isn’t fully developed yet but he can move his feet surprisingly well for a big man – something he showed off in defensive close out drills. Swanigan has all the tools to develop into a force in the post, especially if he continues to grow. With good tough around the basket, consistent effort and proper positioning, he’ll be fine.

Barret Benson (2016 Big, 6-foot-8) – Benson didn’t stand out quite as much as Swanigan, but he still had a solid morning and is a promising post prospect. The Hinsdale, IL native showed off an already-developed ability to execute the pick-and-pop during five-on-five scrimmages and had a few nice midrange knock-downs off that action. His shooting stroke is already well-developed and he’s comfortable shooting from anywhere within the arc. Benson’s footwork and quickness on offense was impressive, he also runs the floor well and created opportunities for himself that way. Benson could stand to be more active on the glass — at his height, he should be rebounding better than he did Saturday morning. His defense also needs work. Benson got beat a few times by quicker big men in the post and his defensive quickness is something he should be focusing on this summer.

Skyler Nash (2016 Wing, 6-foot-4) – The 6-foot-4 Chicago native is a physically imposing presence at such a young age. He was one of the best athletes in the morning group and has a tremendous wingspan. His game is smooth and he’s a capable scorer in all three facets – from deep, mid-range and at the rim. Nash performed well in drills and his five-on-five team won its fair share of games on the winners’ court as well. Nash is transferring to Whitney Young from De La Salle for the upcoming school year to play with top prospects Jahlil Okafor and Paul White.

DJ WIlkins (2016 PG, 6-foot-2) – Wilkins is a long and athletic guard with the easy ability to get in the lane; he was most comfortable scoring from mid-range or at the rim. His jump shot is a work in progress but he was one of the more impressive physical backcourt talents in the underclassmen group. Wilkins, 6-foot-2, played more off the ball than on the ball at camp but seems to project better as a bigger point guard. His development will likely depend on his growth (into a wing) or offensive skillset (into a lead guard).

Devon Daniels (2016 Wing, 6-foot-4) – Daniels had a great day in five-on-five play as he knocked down threes, drove the basket and got out in transition. His shot release is a bit funky but it was productive in full court action. He had a highlight (missed) dunk attempt in transition but still showed off his athleticism throughout the day. The Battle Creek native is a player to watch in the state of Michigan going forward.

Jermaine Jackson (2017 PG, 5-foot-3) – Jackson is still tiny (just 5-foot-3) but he’s electric with the ball in his hands. He was dominant in three-on-three play, consistently creating his own shot at the rim or from mid-range, and has incredible quickness. Jackson is wired to score the basketball

Jamal Nixon (2017 Wing, 6-foot-3) –Nixon caught our eye as a promising young player at camp. He already has a great frame and was able to get into the lane quite a few times and finish creatively. Just a rising freshman, he’s still very raw but the ease at which he plays the game shows a lot of promise for the future.