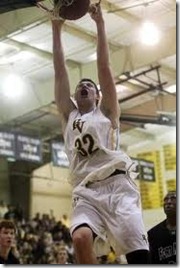 Our second scouting report from Michigan’s College Practice Camp focuses on the upperclassmen post players that were in attendance at the afternoon session. Michigan commitment Ricky Doyle headlined the group but a number of other impressive prospects were in attendance.

Ricky Doyle (2014 Big, 6-foot-9, Commit) – This was a great opportunity to see Michigan’s lone commit in the class of 2014 in action. Doyle is a bit of an anomaly because he doesn’t play AAU ball and he lives all the way in Florida — these factors amount to not being able to see him live before Saturday. Doyle is pretty huge for his age, standing 6-foot-9 and weighing in at about 235 pounds, but what stands out about him physically is his wingspan. His imposing physical presence belies a soft touch around the basket and an above-average jump shot for a big man. His release point is very high, but he must work on squaring his feet — it was remarkable how consistently his shot missed when he didn’t land with his feet set properly. Doyle is adept at using his body to clear out space for himself in the post. He showed off an ability to seal off his defender in the post and use his feet to get by him. However, Doyle needs to work on being stronger with the ball in his hands under duress near the hoop. While Doyle moves well without the ball, he could have rebounded better Saturday. At his size, Doyle should be the one dictating the glass, and he wasn’t in command of that aspect of the games at camp. One thing that stood out about Doyle’s game was how well he ran the floor with his big frame. Doyle showed an advanced skill set on Saturday and will only get better before he lands in Ann Arbor.

Noah Dickerson (2015 Big, 6-foot-8) – The Georgia big man caught the eye of Michigan’s coaches this spring, and we got our first live look at him on Saturday. Dickerson was very impressive — outside of Devin Booker, I would say he had the best showing at camp. The 6-foot-7, 238-pound forward has a big body and he knows how to use it effectively. He doesn’t look super imposing and his athleticism isn’t anything to scream at, but Dickerson is a gamer. In the drills, he moved a little slowly and struggled with his off hand. But once the three-on-three and five-on-five action started, he came into his own. Doing his frame justice, the overpowering post play doesn’t back down from anybody and plays extremely tough, physical basketball. Playing for the Georgia Stars on the EYBL, Dickerson has developed a reputation as a bruising inside presence, and he lived up to that billing on Saturday. Dickerson was the most active rebounder at camp and was consistently assertive on offense, doing an excellent job of sealing of his man in the post and making himself available to his guards. While his post skills — footwork, positioning, etc. — need some work, Dickerson has the edge and the will to compete with anyone. He was good at using his opposite shoulder to clear space for his hook shot and used a drop step effectively. There were times when Dickerson forced the issue on offense, but overall it was a very successful camp for the big man.

Nate Fowler (2015 Big, 6-foot-9) – At 6-foot-9 and 235 pounds, Nate Fowler is a prototypical back-to-the-basket player. The rising junior out of Moeller High School possesses solid footwork and above-average fundamental skill when it comes to post play. Fowler knows what he is and he doesn’t pretend to be anything else: he’s a center, and proud of it. Fowler is not very athletic and needs to work on his foot speed, but he has a good jumpshot with a consistent release, even if his setup starts a little low. His range on the court is pretty limited — if he doesn’t receive the ball on the block, there’s little chance he’ll do anything with it. However, once in the post he has an array of moves he can employ, from a good hook shot to a solid, if a bit slow, drop step.

Brennan Gillis (2015 Forward, 6-foot-6) – Gillis didn’t have a terrific day during the five-on-five scrimmages, but still showed off some ability. In shooting drills, Gillis demonstrated a consistent, easy stroke that found the bottom of the net more often than not. On defense, Gillis stood out because of his awareness and his willingness to provide help — he displayed an uncommon feel for team defense you don’t often see in younger players. At 6-foot-6, Gillis possesses an able shooting stroke from long range for a big but he’s a bit undersized for to play on the interior.

Justin Tillman (2014 Big, 6-foot-7) – The rising senior out of Pershing High School certainly has athleticism; Tillman has spring-loaded calves and is very coordinated. When he turned it on Saturday, his athleticism just sort of took over and he was able to make impressive things happen near the basket. Specifically, the Detroit native was able to rise up for more than a few offensive rebounds and then finish in traffic. Tillman’s problem is that his offensive game is limited to scoring around the hoop and he doesn’t have the lower body to be a true post player at this juncture.  He is definitely talented, but his body type suggests stretch four while his skill set suggests post player. Tillman certainly has athletic ability, but he’ll have to either work hard to improve his perimeter game or go hard in the weight room to be able to bang in the post.