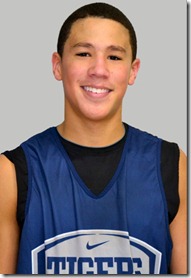 Our third scouting report from Michigan’s College Practice Camp on Saturday focuses on the guards and wings at the second session of Michigan’s camp for class of 2014 and 2015 prospects.

Devin Booker (2014 Guard, 6-foot-5) – Booker emerged at Michigan Camp two years ago. He was a relative unknown in the underclassmen session and lit up the camp with his ability to get open and knock down jump shots. Now he’s a five star recruit with offers from Kentucky, Duke, North Carolina and just about everyone else. He was the guy at camp this year and everyone knew it. He didn’t disappoint.

Booker’s performance was a reminder of just how good he has become. He wasn’t just hitting jump shots (although he did that too), he was a dominant offensive force. His five-on-five team didn’t lose, he wasn’t scared to tangle horns with whoever wanted to battle, and he consistently finished at the rim. While he was clearly the most talented player in camp, his competitiveness was the most refreshing part of his performance. Booker went all out despite his elite stature. His jumpshot is pure, and his ability to move off the ball and create offense has always been impressive, but he also finished above the rim several times in five-on-five play.

Overall it was a complete performance from Booker, who was easily the star of the camp. His decision to head to Michigan’s Camp, the day after he got back to Grand Rapids from Mississippi, was a big one and shows that Michigan continues to be a major player in his recruitment.

Kameron Chatman (2014 Wing, 6-foot-7) – Chatman’s versatility makes him a perfect fit for Michigan’s offense. His 6-foot-7 frame, length, ball handling and left-handedness all play seamlessly into the four position in Michigan’s offense. His shooting stroke didn’t always get results at camp but it looks good and will come with time. He was content to spend a lot of time setting up his teammates and it would have been nice to see him more aggressive for his own offense in the camp setting, but the passing and ball skills he demonstrated are rare for a player of his size. He’s a very good rebounder (although added strength will help in this department) and his length is a great boost defensively.

There’s a sense of calmness to his game with the ball in his hands and it’s clear that his best basketball lies ahead of him. With the talk about his ball skills and passing and questions about his shooting, it’s important to remember that we’re talking about a player that is a potential stretch four in Michigan’s offense.

How well has Chatman played on the AAU circuit this spring? Michigan offered him on Sunday morning during his full unofficial visit and Duke and Michigan State are the latest schools to come calling.

Hyron Edwards (2015 PG, 6-foot) – There are a lot of highly regarded point (and combo) guard targets on Michigan’s recruiting board for the class of 2015 (Jalen Coleman, Sedrick Barefield and Eric Davis highlight the list) but for one reason or another, they weren’t at camp on Saturday. Hyron Edwards was and their absence could be his gain. Edwards deserves credit for making the trip to camp and playing well in front of the Michigan staff.

Edwards hasn’t had the best spring but had a good showing at camp. He wasn’t dominant in the scoring column but he’s jet quick with the ball and looks to distribute first. He was probably the best point guard prospect in the afternoon session and thrived in full court scenarios. His handle is excellent and he showed the ability to control the pace of the game.

Prentiss Nixon (2015 PG, 6-foot-2) – Nixon never seems to dominate a game but he makes smart plays whenever he touches the ball. I saw him knockdown a triple, drop dimes for easy baskets in transition and finish at the hoop in various five-on-five sightings. His confidence in a camp setting was clear as he made quick decisions and didn’t hesitate – usually ending up with a positive result. He’s probably just one to watch at this point but Michigan has been tracking him for a long time and he’s developed consistently.

Chandler White (2015 G, 6-foot-3) – White continues to be one of the more physically impressive guards in the class of ‘15. He has great strength and athleticism which was obvious in finishing drills. White muscled through contact and finished with ease while smaller players were knocked off course. His jump shot isn’t the greatest but it continues to improve steadily.

Jordan Ash (2015 G, 6-foot-1) – Ash is only listed at 6-foot-1 but he has a good frame with strength, athleticism and length. He can drive to the rim with ease and has the athleticism to score against bigger defenders. His shooting hamstrings his offensive game at this juncture but he his athletic talent makes him one to watch going forward. Somewhat similar to Chandler White as an athletic guard prospect, he might be a step behind at this juncture.