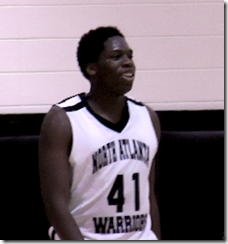 Noah Dickerson, a 2015 big man originally from New Jersey but playing in Atlanta, was one of the standouts at Michigan’s College Practice Camp on Saturday. We caught up with him to briefly talk about what he thought of Michigan, his relationship with Devin Booker and more.

How’d you play at camp?

I sprained my Achilles’ (at an event in California). I’m more athletic than I looked (at camp). I couldn’t jump. It hurt to jump, so I wasn’t trying to jump real high. Usually once I get going, it’s better, but I couldn’t warm it up so I had a hard time jumping.

Even taking into account the injury, how do you feel you played?

I think I played pretty well. I think I played really well. It’s a team camp, so people are just trying to put up shots and stuff like that. You’re supposed to be a great teammate for the players who aren’t as skilled as others. You’re supposed to be patient and help other people get better. Overall, I think I did pretty well. I showed personality. I showed my skill and my personality throughout the camp, I guess you could say.

I saw you and Devin Booker going at it. Do you know him from the EYBL?

I met him actually last year at the Alabama Elite Camp. I met him last year. And you know, we’re competitors. We go at it, you know?

Was it fun going up against him?

What was it like going up against Ricky Doyle?

He’s good. To me, he seemed like a forward. He can shoot the midrange really well, he can run to the rim, he rebounds really well, boxes out well and he plays good defense. He’s good. I can see that Michigan wants guys who can play, but also really really good guys — really nice guys who have great character and things like that.

What did you think of your first visit to Michigan?

It was nice. It was real big, especially when you go by the football field, it was huge. I liked it. Before I came to the camp I got to drive around the campus a little bit, I got to see a few stores and I liked it. It had a hometown feel to it. And then the facilities themselves were really nice. I liked the weight room that they have. I loved it. It was great.

Did you have some time to talk with the coaches one-on-one?

Yes. When they had that little buffet (after camp), my mom and I sat down and talked to all the coaches.

Were you able to stay for regular visit activities on Sunday?

I was supposed to have a visit on Sunday, but my mom couldn’t make it work so I had to go.

How did camp affect what you think of Michigan?

A lot, actually. I knew what the media said about the coaches, but that’s not always correct. So when I met with the coaches, it was like wow, these are really, really great guys. They just seem like overall really great people.

What are your visit plans for the rest of the summer?

I know I will be going to Tennessee, Virginia and Stanford.

What schools are recruiting you the hardest?