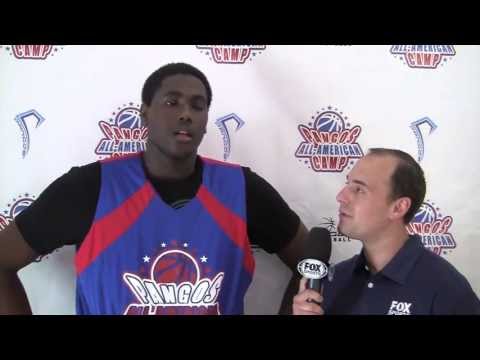 All eyes were on Michigan’s College Practice Camp over the weekened but there were a number of other high profile camps and showcases around the country. The Pangos All-American Camp, USA Basketball 16U Tryouts and Super Sophomore Camp all attracted a lot of top talent. Here are some recruiting and scouting notes from those high profile events.

Elijah Thomas had an impressive weekend at Pangos and updated his recruitment with Scout.com’s Evan Daniels.

Thomas plans to start to schedule unofficial visits after June 15th when coaches are officially allowed to reach out to 2015 prospects.

Thomas was singled out by ESPN’s Joel Francisco as “a load in the post” at Pangos:

Thomas is the owner of the broadest shoulders in the country and is deceptively bouncy considering his size. Once he establishes his position on the block, he is difficult to stop over his right shoulder. Not to mention, he is quite the allusive power finisher in transition for his size.

Thomas wasn’t the only class of 2015 big man to have a big weekend in California, Stephen Zimmerman had a great weekend as well. Rivals writes that Zimmerman is easily the No. 2 player in the class:

Make no mistake about it, Stephen Zimmerman‘s spot at No. 2 in the class of 2015 is safe. The lean and lanky big man was again playing a game that features skill, coordination and improved athleticism. He had a series on which he chased down a dunk attempt for a big block and then on the other end of the floor he took the ball to the rim off the dribble for an emphatic slam during a wing clearout/isolation. There just aren’t a lot of 6-foot-11 rising juniors capable of that.

Zimmerman also had this huge dunk:

An in-state prospect continued to emerge at Pangos as well, class of 2014 post man Jaylen Johnson had yet another big weekend. Rivals was impressed:

Four-star big man Jaylen Johnson continues to have a nice spring. The 6-foot-9 power forward can run the floor, and he’s active on the glass. The offense will come along, but his activity in the lane will make coaches smile. Oregon, Michigan State, Arizona State, Arizona, Iowa, Miami, Florida State, Central Michigan and Cincinnati are among those involved.

ESPN tabbed Johnson as a “diamond in the rough”:

Johnson was one of the most impressive bigs we saw all weekend. Johnson has terrific length, broad shoulders and a bouncy game. He displayed a soft touch in and around the paint area as well as some signs of an emerging face-up game.

Johnson apparently didn’t list Michigan to most publications at Pangos but his AAU coach reports that an unofficial visit to Michigan is in the works.

USA Basketball hosted a number of the top underclassmen prospects in the country at 16U tryouts in Colorado Springs over the weekend. Josh Jackson, Diamond Stone, Devearl Ramsey, Eric Davis, Tyus Battle, VJ King and Derryck Thornton were some of the prospects on Michigan’s radar at the event.  Jackson, Stone, Ramsey and King all made the final cut and will travel to Uruguay for the FIBA Americas Championship.

247 Sports’ Jerry Meyer was impressed with Jackson, Stone and Ramsey among others”

2016 combo forward Josh Jackson has impacted the play with his athleticism and versatility.

It took a little time but Diamond Stone started to establish himself as one of the USA’s top low post scoring threats. He doesn’t have the athleticism of Giles, Rabb or Daniel Giddens, but he does have the ability to score over defenders in the low posts.

Jackson also caught the eye of Future 150 at USA Camp:

The 6’6″ wing is a swingman who loves to play physical basketball. He rebounds the basketball at a high rate and can score in a variety of ways. He is also a relentless on-ball defender. Look for him to showcase his improved skills in Colorado.

Saginaw forward Al Eichelberger is one of the more promising 2016 talents in the state of Michigan. Judging by these highlights, he had a big weekend at the Super Sophomore Camp in Atlanta.

Other Michigan targets were in action at the Super Sophomore Camp including Eron Gordon: