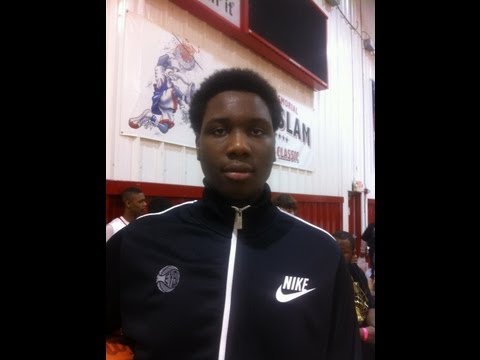 At 6-foot-8, 260 pounds, Caleb Swanigan stood head and shoulders above pretty much every camper during Michigan’s morning session at College Practice Camp on Saturday.

But it wasn’t just his height and his frame that made the 2016 big man prospect stand out — it was also his talent. Swanigan is mobile, relentless on the boards and has excellent touch around the basket.

“I’m more of a back-to-the-basket type of big man that rebounds a lot,” Swanigan said on Wednesday, describing his game. “I have a Zach Randolph type of game — that’s who I base my game off of. Being physical and playing with both hands on the rim.”

Swanigan certainly has the frame to body defenders the way Randolph is fond of doing, and he showed it off plenty during camp.

Swanigan said he’s focused on dropping weight this summer. Because of that, the portion of camp that interested Swanigan the most was when the players had an opportunity to visit Michigan’s weight room.

“Probably the cross-training part where we went up to their weight room and saw what some of the guys do when they train,” Swanigan said when asked about his favorite portion of camp. “It’s something I could benefit from, definitely.”

As of now, Swanigan is one of the top post players in the class of 2016. The Fort Wayne native is playing with the Spiece Indy Heat 17U team, which places him in the same lineup as the likes of Trey Lyles, Trevon Bluiett and James Blackmon.

In just over 15 minutes per game on the EYBL circuit, Swanigan averaged five rebounds per game. While Swanigan didn’t get on the court as much as he would playing for a lower-level team, he said he enjoys his time with the Heat.

“It’s fun,” Swanigan said. “It’s a challenge and it makes me raise the level of my game.”

And those are just the schools recruiting Swanigan for basketball. The youngster is also being recruited by some top football schools who think he would make an excellent addition to their offensive line. However, Swanigan said he’ll only play one sport once he gets to college.

“I’ll only play one sport in college,” Swanigan said. “That (decision) is probably going to come down the road, junior or senior year. I’m just having fun right now.”

Swanigan said he watched quite a bit of Michigan’s run to the national title game of the NCAA tournament. He liked what he saw, especially in the way Michigan utilized its own talented big man, himself who occasionally joked about playing football.

“I like how they let their big men play with versatility,” Swanigan said. “They can come out, set picks and get involved in the offense, take outside jumpers. They play at a fast pace, too.”

The Michigan coaches also made a strong impression on Swanigan.

“I think they’re nice guys,” Swanigan said. “They’re really energetic, they want the best out of their players and they seem like a fun staff.”

While he also visited Michigan State during his trip to the mitten, Swanigan will also be visiting the Spartans as a football prospect later this summer. He will also be making the trip to Tuscaloosa for a football camp at Alabama.

While there is indeed a long list of suitors lining up for his services, Swanigan said he came away from Michigan’s camp impressed.

“It was a good camp,” Swanigan said. “It was nice to start off at Michigan. I like the rich program history with the Fab Five, and even before then, how big the program has always been.”