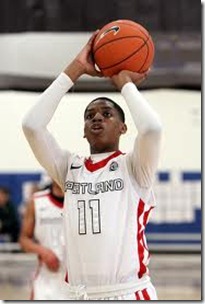 The April evaluation and Michigan’s College Practice are both in the books and class of 2015 “offer day” (June 15th) is just over a week away.

The early recruiting season has seen little change to Michigan’s recruiting situation for the class of 2014. Kameron Chatman emerged as a legitimate and offered prospect at the combo forward spot but while Devin Booker, Trevon Bluiett and Vince Edwards have Michigan high on their lists, they are still in no real hurry to make a decision.

While that progress has been slow, Michigan’s strong 2012-13 season has made a tangible impact to class of 2015 prospects. While it hasn’t netted results in the way of commitments, it has opened a number of doors with prospects that probably wouldn’t have paid much attention in year’s past. Kevon Looney, Stephen Zimmerman and Elijah Thomas are the sort of prospects that Michigan can pursue that it couldn’t just two or three years ago.

Based on what we’ve seen in camp and on the AAU circuit, here are four thoughts on Michigan’s 2014 recruiting, 2015 offers and much more.

1. Devin Booker is the real deal

It’s tough to see Devin Booker that often around the Midwest. The closest that the EYBL Circuit takes his Alabama Challenge team is Minnesota and he plays his high school ball all the way in Mississippi. We’ve gotten a taste over the last two seasons at Michigan Camp or Indianapolis with the Grand Rapids Storm but he put on a show back home on Saturday afternoon.

We’ve watched Trevon Bluiett put up big numbers all summer but Devin Booker has to be the No. 1 target on Michigan’s recruiting board right now. Booker’s offensive game continues to reach new heights and the competitiveness he showed at Michigan camp was very impressive.

No one at camp walked away and thought Kameron Chatman had his best day of basketball – or even that he played like one of the best players at camp. However, he had flown across the country the day before and was playing with everyone watching him. He didn’t land on the best team (and it showed) and just didn’t have the best day. But his offer was deserved as his potential is impressive.

Michigan has two combo forward offers out in 2014 and would likely take one or the other. I think both Vince Edwards and Chatman have the ability to fill the role in Ann Arbor but Chatman looks like the prospect with the much higher ceiling.

In recent seasons, Michigan’s recruiting picture was pretty well established at this point. There was a core group of players that were going to receive offers, they had visited and Michigan had prioritized them. With under two weeks until “offer day” the picture isn’t so concrete.

Dwayne Bacon, Sedrick Barefield, Jalen Brunson and Stephen Zimmerman are some of the top recruits on Michigan’s board. They also haven’t fulfilled the unofficial visit criteria for an offer. Hyron Edwards made it to camp but at this point he’s not the surefire offer that he was a year ago – especially given the other targets on Michigan’s recruiting board. Then there are a host of players that require more evaluation – Noah Dickerson, AJ Turner (now a ‘15 prospect), Nate Fowler, Evan Boudreaux and many others.

Luke Kennard has been to Michigan many times over the last three years and is as sure as anyone to receive an offer on June 15th. Diamond Stone and Jalen Coleman (although he missed camp) fit the bill talent wise and both made it to Ann Arbor last fall.

Beyond that, it appears to be a waiting game. That might not be a bad thing either. Given that so many questions remain for the class of 2014, Michigan doesn’t need to be in a hurry to add ‘15 prospects.

A number of big names on Michigan’s recruiting wish list weren’t present at camp this year and looking at a map it’s pretty obvious why. The Wolverine staff is focusing its sights beyond the Midwest once again. In recent years, Michigan narrowed its recruiting focus to predominantly Michigan, Ohio, Indiana and Illinois.

That was also the class appeared to trigger the shift in recruiting philosophy. Michigan missed on some key targets that year – including Tennessee based Casey Prather (and before him Nate Lubick, Andy Brown, Klay Thompson, etc.) – and completely revamped the assistant coaching staff after a disappointing season.

Beilein replaced Jerry Dunn, John Mahoney and Mike Jackson with Jeff Meyer, Bacari Alexander and LaVall Jordan. That meant three assistants with strong Midwestern roots instead of one. Michigan’s recruiting has not only been more focused locally – it’s been significantly better.

Now, with a Big Ten Championship and a trip to the National Championship game in hand, John Beilein and his staff appear to be ready to expand the net once again. Ricky Doyle committed from Florida and Kameron Chatman earned an offer from California. The Wolverines have made frequent stops to the West coast, pursuing 2014, 2015 and 2016 prospects heavily and have begun to poke around with big names all over the country. Noah Dickerson made the trip from Georgia, the staff is pursuing Dwayne Bacon and Corey Sanders in Florida, top-10 Texas big man Elijah Thomas is also hearing from Michigan.

In the near term, that means a more unsettled recruiting board and a whole lot more risk. But it’s a gamble that Beilein and his staff seem to be ready to take. It also might be a bit by necessity. The state of Indiana is down on the class of 2015 and prying into Ohio and Illinois is always difficult given Ohio State and Illinois’ stature in both states. Michigan has looked locally and will continue to look locally but there are just two top-100 class of 2015 prospects in the state.