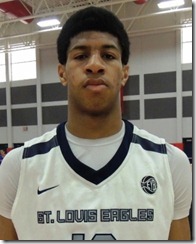 Michigan fans might not be familiar with Jordan Barnett, a 2014 wing prospect from St. Louis, but Michigan’s coaching staff is. The Wolverines noticed Barnett at the Nike EYBL in Hampton and hosted the high-flying senior for an unofficial visit last week.

After a solid high school season, Barnett has had an even better spring on Nike’s EYBL circuit. Barnett, a consensus top-100 prospect, was the leading scorer for the St. Louis Eagles with averages of 14 point and six rebounds per game and helped his team to a Nike Peach Jam berth.

“I would just say I’m a do-it-all small forward who can do just about everything,” Barnett said during a phone interview on Friday. “From handling the ball, passing the ball, make plays, jump really high, get rebounds, play good defense, and just do about everything. I’m a high-energy player and I can bring a lot of energy to a fan base.”

Barnett’s play has naturally attracted plenty of attention from schools all over the country. He reported offers from Kansas State, Oklahoma State, Florida, Iowa, Michigan State, Texas and Stanford.

The one school he could recall that is interested but hasn’t offered? That would be Michigan.

“[Michigan] said they would like to offer me, but coach Beilein said specifically that I couldn’t get an offer from Michigan unless he saw me play,” Barnett said. “Beilein hasn’t seen me. He said if he saw me and he liked what I did, I’d probably get an offer.”

Barnett had this conversation with Beilein during an unofficial visit last Thursday. Barnett and his parents were able to stop by on their way to a family gathering in Toledo.

He and his family saw the campus and toured Michigan’s facilities with the coaching staff.

“They showed us around campus. They showed us the facilities, some of them are under some renovation, but it was really nice,” Barnett said. “They showed us the weight room, and what would be going on there. They have so many resources. They talked about academics, they’re really on academics. It was a really good visit.

“It was a really good campus. They told us that everything would be pretty compact. My classes would all be in the same area, which is good, I wouldn’t want to be running all over campus to get to my classes. It was new. The new buildings, new facilities. Some of the other schools had building that were kind of old, so it was nice to see some things were up-to-date.”

At this point, Barnett said Florida, Texas and Iowa were the schools recruiting him hardest, with Michigan State somewhat in that group as well. While Barnett is an able scorer, the aspect of his game that stands out the most is undoubtedly his athleticism. Barnett truly plays above the rim.

This is part of the reason he likes Michigan — with an abundance of raw talent, Barnett witnessed the sort of player development evident in the games of Trey Burke and Tim Hardaway Jr. and wants the same for himself.

“Starting with their NCAA tournament run, that was a relatively young team, pretty much an under-recruited team with the exception of Mitch McGary,” Barnett said. “I had never heard of Trey Burke before he went to Michigan and he was player of the year, and he’s a lottery draft pick right now, as well as Tim Hardaway. I feel like that really shows good player development, and that’s something I really look forward to. I really want my game to develop so I can possibly go to the NBA one day.”

For now, Barnett is working hard on developing his handle, with the knowledge that he will probably play shooting guard in college (he plays mostly small forward now). His aggressiveness has improved, as has his strength around the basket — though he is still working on adding muscle. Barnett estimated he’s put on 20 to 25 pounds over the past school year alone.

Barnett said that he’s like to make a decision before the summer is over, but knows it may take longer than that.

“I really would like to make a decision by the end of the summer,” Barnett said. “That’s what I’d like to do, but I don’t know if that will happen or not. I’m trimming my list down very slightly and I feel like I’m getting closer.”