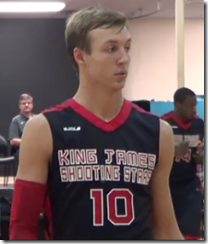 Nike hosted an impressive number of top prospects in the classes of 2015 and 2016 in St. Louis over the weekend for the Elite 100 Showcase. While media access at the event is somewhat limited, reports were allowed to be filed on Sunday evening.

He does a little bit of everything well. Can shoot it from deep or attack the rim. He showed a lot of aggression attacking the bucket and forcing the defense to converge on him all weekend long.

Kennard has had a huge spring and Michigan coaches tracked him steadily throughout the April evaluation period. A June 15th offer appears inevitable but Ohio State, North Carolina and Indiana continue to intensify their recruitment of the 6-foot-6 junior, now ranked 32nd in his class by both Rivals and Scout.

Kennard was also singled out by Scout.com’s Evan Daniels and 247Sports’ Jerry Meyer as one of the top wings in attendance.

Was impressed w 6-4 sg Luke Kennard. Lefty has bounce, can score going either direction, handles well, doesnt turn it over.

Florida duo Dwayne Bacon and Corey Sanders were also in attendance and had a strong showing. Our eyes at camp were impressed by both players.

Dwayne Bacon: He’s unbelievably talented. He’s strong and found his way into the lane on a number of occasions by simply overpowering his defender. I just wish Bacon always played with high intensity.

Corey Sanders: An impressive athlete, Sanders made some difficult shots and found open teammates for high-percentage looks. I definitely thought his vision was one of the better amongst those at the camp.

Two Michigan point guards high on Michigan’s board had solid weekends at the event. Here’s a report on both Sedrick Barefield and Jalen Brunson’s performances in St. Louis.

Sedrick Barefield: His handles are excellent, but he sometimes found his way into trouble once he hit the lane. He has a very deft touch from the perimeter and mid-range. If he works on finding teammates in better spots, he will make for a very good lead guard.

Jalen Brunson: Such a competitor. He was one of the toughest kids at camp and did everything in his power to will his team to victories. He’s got a solid shot from behind the arc and can take you off the bounce and do damage. Definitely one of my favorites.

Big man Noah Dickerson, who played well at Michigan’s College Practice Camp last week, also had a strong showing. 247 Sports named him one of the top big men in attendance:

Dickerson isn’t an overwhelming athlete, but he is a good athlete who has an impressive 7-1 wingspan at 6-8. Most importantly he competes at a high level and loves contact. The potential is there for him to be a steady scorer in college who will bang and compete on the glass. Dickerson was one of the few big men who when he got his hands on the ball, you felt confident that he would ultimately secure it.

Trevon Bluiett updated his recruitment while playing with the Indiana Junior All-Stars against Kentucky last week and his list continues to grow – not shrink.

“It expanded recently with three new offers from Texas A&M, West Virginia and Vanderbilt,” Bluiett told the News Sentinel. “I’ve been talking to them a lot so that’s probably the only new thing.

“[I’m considering] 23 [offers] right now, we still haven’t eliminated any schools so we’re a little bit late on that aspect.”

However, Bluiett did admit that he hopes the end the process somewhat soon, looking at a decision after taking his official visits.

“Hopefully I take my officials pretty soon and then hopefully before my senior season I’ll probably make a decision.”

Chatman had a 14 point-12 rebound performance (5-of-9, 1-2 3pt) shooting in a 31 point win over Oregon Pump ‘n Run on Friday. He followed that up with a rough shooting night on Saturday, going 2-of-10 (0-1 3pt) from the floor to finish with 10 points, eight rebounds and six assists in a seven point win over SimplyFundamental.

On Sunday, Chatman helped ICP Elite to a three-point championship victory over I-5 Elite with 22 points on 7-of-17 shooting. Oregon Live posted this scouting report of Chatman.

Chatman showed his versatility all weekend long, handling point guard duties at times and playing around the rim, as well. He showed his ability to score from all over the floor, helping him to average over 15 points per game. Chatman scored a game-high 22 points in the championship game on 7-17 shooting, and added four rebounds.

While he was back in Oregon for the weekend, Chatman also stopped by Oregon for an unofficial visit.

Brunson also hopes to visit Michigan soon according to an update at NY2LA Sports.

Michigan: “Their coaches have come to a lot of open gyms. During the live period, they really showed a lot of interest. They want to get me on campus. I think I’ll be taking a visit soon.”

As mentioned above, Brunson was also impressive at the Nike Elite 100, drawing notice from Jerry Meyer as well.

I love the pg game of Jalen Brunson but was most impressed w Lamonte Turner of Huntsville as pg prospect. Better version of Cornelius Elder