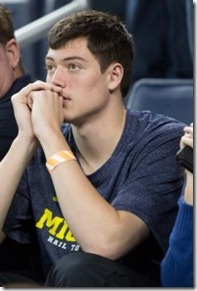 Ricky Doyle lives 1,300 miles away from Ann Arbor in Florida and doesn’t play AAU ball so Michigan fans haven’t seen much of the 2014 commitment.

So when Doyle made the trip to Ann Arbor to attend Michigan’s College Practice Camp, it was an opportunity to see how much his game had grown since his injury-riddled high school season last winter. Doyle didn’t disappoint — despite not being in game shape, he displayed an advanced skill set complete with good footwork, nearly ambidextrous shooting ability and soft touch around the rim.

However, he did hear from Michigan’s coaches about some aspects of his game that still need improvement.

“They complimented me about being really good with both hands, I’m like ambidextrous around the basket. Coach BA (Bacari Alexander), he told me there’s little things I need to worry about — bad habits I need to get out of,” Doyle said during a conversation on Sunday. “Like, when I catch a rebound, instead of doing a chest pass for the outlet doing an overhead pass; the first three steps running down the court are huge; going up with two hands instead of trying to catch the ball with one. Just some bad habits I really need to get out of.”

Doyle has been hard at work all summer on correcting precisely those sorts of “bad habits” — as well as forming some good ones. Doyle’s high school coach at Bishop Verot, Matt Herting, has been working closely with the Fort Myers native all summer. Herting said they’re working on all aspects of Doyle’s game, but focusing on one thing in particular.

While Doyle doesn’t play AAU basketball, he does occasionally play in tournaments as part of a team that is mostly populated by his high school teammates. His coach has had the team playing in tournaments around Florida, and they go to team camps, as well. Doyle’s team will be at Florida’s team camp, AAU Nationals in Orlando and the talented big man will be putting his skills on display at this week’s NBPA Top-100 camp in Virginia (rosters).

In short, Doyle may not play with an AAU team during the summer, but he plays plenty of basketball. And this summer, he’s playing well.

According to Herting, the summers give Doyle an opportunity to test some of the skills he works on in drills but that he might not employ much during the high school season. This includes guard skills and shooting from deep.

“One thing good for Ricky in these summer league games with us that he touches the ball multiple times every time down the court. Two, in games like that when you’re not trying to win the championship or anything, we can take time to get Ricky on the perimeter, let him catch-and-shoot, and work in a lot of perimeter things,” Herting said. “It’s a chance to get Ricky out there and let him handle the ball, face up and shoot threes, and work on things he’s going to have to do well at the college level.”

Herting said he would like to see Doyle improve enough in his face-up game to be able to go to it consistently during the high school season next year. But the most important hope he has for his star player next year is to stay healthy.

Early on in Doyle’s recruitment, Herting articulated a very specific schedule he and Doyle’s father had laid out for Ricky’s development over the course of four years. The milestones included anything from specific weightlifting numbers to the development of different skill sets. Three years into this program, Herting said Doyle is right on schedule.

“He is on schedule. You plan things a year in advance, and a lot of times you underestimate things in the weight room, especially. Some things are easier or this one might be a little heavier for him to do. But as a player, he’s right on schedule.”

For Doyle, he continues to go about his business quietly, away from the cameras and bright lights of big-time AAU tournaments. The rising senior instead chooses to work with his high school team deep in the south — it may not give Michigan fans many chances to see him play, but that’s the way it is.

During his brief foray into Ann Arbor, however, Doyle got to catch another glimpse of the place he’ll call home in just one year.

“Being up there again was like a kid going to Disneyland. Being up in that gym, it’s like Candyland for me,” Doyle said. “I love going up there, man. Everything’s so nice and clean, you feel like you’re at home when you’re up there.”

Doyle said he got to speak with 2014 super-recruit Devin Booker and that the two exchanged phone numbers (“We’ll be in touch,” he said). Doyle also went up against Noah Dickerson, a 2015 big man recruit Michigan has been eyeing.

While Doyle said his favorite part of camp was the 3-on-3 portion, his main takeaway was meeting other players and seeing Michigan’s coaching staff do their work up close.