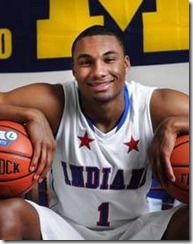 Zak Irvin looks like Mr. Basketball, the best player amongst some really great players. He started the game hitting 4 threes in the opening minutes. Smooth. He never tried to take over. He finished with 21 points and led a balanced attack for a talented all-star squad. He’s still thin, but looks a little more filled out than last year when I saw him play during the high school season. I think he’s going to be real nice. Big time talent. Could be a 6’7″ guard in The League someday.

This was an interesting choice. It was either Zak Irvin against Trevon Bluiett or Darius Latham vs.Trevon Bluiett. Latham showed out tonight a couple times but Irvin was a great, interesting matchup for Bluiett.

Both guys played really well. Irvin’s length made it difficult for Bluiett to guard him when they were matched up. Zak was able to just shoot right over him. However, Irvin stayed on the perimeter more than maybe he would have liked as Bluiett was able to cut down the drives to the basket.

On the other end, Bluiett struggled to get things going in the first half as he settled for threes rather than getting into the lane. As the game progressed, Bluiett was able to find holes and get to the bucket. He finished with only 12 points but they were hard earned.