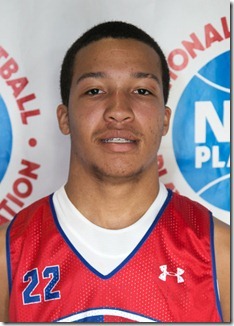 When Michigan sends out its first offers to prospects in the class of 2015 on Saturday, point guard Jalen Brunson will be left waiting — but that could change when the Lincolnshire, Ill. native makes it up to Ann Arbor for a visit. While an offer won’t come on June 15th, a phone call from Michigan head coach John Beilein probably will.

There appears to be lots of mutual interest between Brunson, one of the top point guard talents in the class of 2015, and Michigan, who will likely be looking to continue its pattern of landing a lead guard every other year.

“They’ve wanted me to call a couple times,” Brunson said on Thursday during the NBPA Top-100 Camp. “I have been in touch with them the past couple weeks. I’m talking to them. They’ve come to a lot of open gyms. Just to have them show that much support shows that they are really looking at me.”

It’s easy to see why Brunson is so coveted. The youngster already has a highly developed jump shot as well as great handle. He also has the ability to finish strong in the post among taller players — at just 6 feet tall, Brunson doesn’t have great size just yet (similar to another recent Michigan point guard you may be familiar with), but he knows how to use his body to create space down low.

His production this spring playing up a grade level for the Mac Irvin Fire on Nike’s EYBL circuit really made him stand out, and it’s attracted attention from schools all over the country: Brunson said he’s in contact with Michigan, Virginia, Temple, Missouri, Connecticut, Creighton, Tulsa, DePaul, Illinois, Purdue, Xavier and SMU.

For now, Brunson has no timeline and is simply taking it all in.

“I think right before my senior season (I’d like to make a decision) so I can lay back and focus on basketball,” Brunson said. “But if it doesn’t happen, I’ll just have to grind it out and see where I want to go.”

The rising junior from Stevenson High School saw Michigan coaches stop by his open gyms in the spring and he also saw them on the sidelines of plenty of his EYBL contests. It looks as though Brunson will be returning the favor soon, he hopes to visit both Michigan and Michigan State when his high school team plays at Michigan State’s team camp next weekend. An offer could be waiting for Brunson when he arrives in Ann ARbor.

“They have [discussed an offer] a little bit,” Brunson explained. “They haven’t officially offered me a scholarship, but when that time comes, hopefully it does, right now I’ve just got to focus on basketball.”

Throughout his contact with Michigan’s coaching staff, Brunson has heard quite a few comparisons between his skill set and the skill set of the recently-departed Trey Burke. What excites Brunson the most about that is the freedom Michigan offers its playmakers.

“Last year I kind of knew who he was. But this year I definitely did because he’s an NBA prospect, we’re kind of like the same height,” Brunson said. “I just really saw how he used his athleticism, how he ran his team. I looked at the little things, not just the scoring, not just the passing, but how he was talking to all his teammates. I saw they had a lot of trust in him.”

While Brunson is receiving interest from plenty of schools, he put Michigan in the group of schools that are recruiting him the hardest at the moment, along with Virginia and Illinois.

“I would have to say Michigan, Illinois and Virginia [are recruiting me the hardest],” Brunsons explained. “And Missouri was at one of my open gyms, but it was really those three.”