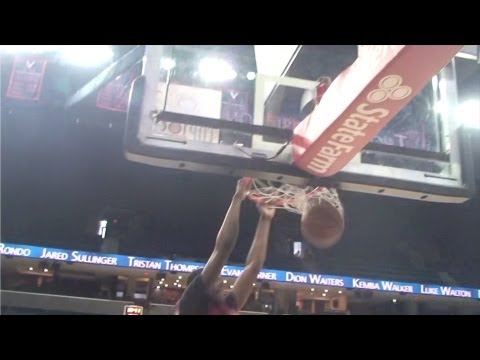 A number of Michigan targets are participating in the presitgious NBPA Top 100 camp in Charlottesville, Virginia this weekend including 2014 commitment Ricky Doyle, offers Devin Booker, Trevon Bluiett and Kameron Chatman along with priority targets Kevon Looney, Jalen Brunson and Stephen Zimmerman. Find a collection of national scouting tidbits and day one per-game averages below.

In the morning session, Booker struggled with his shot but he began the night session connecting on three of his first four attempts. Two of those made shots came off drives to the right side of the hoop while adding in a three pointer from the top of the key. Even when not hitting his outside shots, Booker has an effortless jump shot with a quick release showing why he is one of the top shooters in the class of 2014. During the 3rd quarter, Booker took on the ball-handling duties and became more of a facilitator rather than a scorer. He did go 3-4 from the line in the second half to finish with 12 points and also showed off an improved handle when pressured by the defense.

Booker played really well offensively and was steady throughout the game all-around. Booker knocked down a couple tough 15-footers early, rebounded the ball pretty well and kept the offense in rhythm as a scoring threat, while also getting himself to the free throw line and making the free ones. He finished the contest with 11 points.

Really like Devin Booker's consistent successful drives. For someone known for his shot, his dribble drive can be impressive #nbatop100

Like Whitehead, Zimmerman followed up a strong morning with another good performance in the evening. Blessed with great natural timing and a sound basketball IQ, Zimmerman has a high level of skill for his size and when he adds more bulk, he’ll be even better as a rebounder, interior defender and as a back-to-the-basket scorer.

Another who showed flashes in the morning but took his game to the next level during the night session was Stephen Zimmerman. There’s not much left to write when describing his game that hasn’t already been written. He runs, he has great hands, he can pass and he can score with his back to the hoop or facing the rim. His team involved him more on Thursday night, and he made good on his opportunities.

A combination of effort and production was the story of the evening for Chatman as he showed solid open court transition ability, a decent mid-range feel, and a jumper that could be knocked down from beyond the arc.  Ran the court hard, finished around the basket, gave solid effort, and brought nice activity to the court on Thursday night.

Few, if any, can score with such ease so close to the basket with the high level of consistency that Looney does.  An exceptional rebounding talent in terms of feel, understanding, instinct, and timing, Looney scored at will at times on a variety of put backs and finishes both in transition and half court sets while doing so from point blank range.  An excellent rebounding forward who was dominant around the basket again during the evening session.

Kevon Looney is a five-star prospect and a top 10 player for many reasons. He showed several of them on Thursday night. When Looney first burst onto the scene as a freshman, it was as a lanky, jump-shooting forward. Looney is still lanky and he can still make a shot, but he’s grown to around 6-foot-9, is filling out and has become a factor around the rim. Looney doesn’t just get to rebounds, he secures them and on top of that he’s become a threat as a shot blocker. All in all, it was a great effort for him.

The talented scoring guard made his debut on Thursday night and immediately knocked down perimeter jumpers in a variety of ways.  One thing Bluiett does is wet the nets and he can do so off mid-range looks, runners, and perimeter shots beyond the arc with a high level of consistency.  A solid effort during the second session.

Being able to distribute the basketball isn’t the whole story for a point guard. The ability to hit open shots so the defense must respect you and also the ability to manufacture points when the going gets tough for your team are tremendous assets to possess. Brunson has those assets. The 2015 lefty has a great stroke from behind the arc and can use his physical strength to create separation for his pull up jumper.

Brunson came out firing to the tune of three early three pointers, and a few more scores for good measure. Brunson’s three-point ability is impressive because his shot always looks the same and you get the feeling that it is going to drop every time. Also a talented point guard, Jalen runs offenses well and can find teammates for easy buckets after making defenses collapse. – See more at:

One of the youngest prospects in attendance was Indiana’s Caleb Swanigan. The 6-foot-9, 260-pound mammoth post prospect played an outstanding first game. He used his frame to carve out space for himself, and showed impressive footwork in the post. He also finished everything around the rim.

2016 big man Caleb Swanigan is a space-eater. Has to be about 280 pounds. But he gets good position in the post, can finish with both hands.