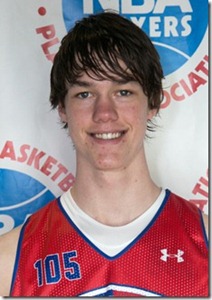 2015 seven-footer Stephen Zimmerman has all the tools: his back-to-the-basket game is advanced for a big man at his age, his jump shot is consistent, and even his face-up handle is better than you’d think. His all-around skill has placed him near the top of quite a few schools’ wish list and squarely in the top ten of the national rankings.

But all of the attention Zimmerman has received to this point is child’s play compared to the volume of calls he’s likely to start receiving on Saturday, June 15th — the day coaches can begin calling 2015 recruits.

“All of the schools have been pretty equal (in their recruitment). Starting this Saturday, they can start calling,” Zimmerman said on Thursday at the NBPA Top-100 Camp. “I want to be a part of it. It’s a lot to handle for one kid, so obviously I want my parents to help me out with it.”

Zimmerman has never been all that keen on talking about his recruitment, preferring to stay focused on improving his game and making sure he’s ready for the next level. For the past few months on the AAU circuit, that has meant playing more aggressively.

At the NBPA camp, he’s trying to prove one thing: that as a rail-thin 7-footer, he can still play physical.

“Get more physical, that’s a big thing for me. Being a skinny 7-footer, it’s hard,” Zimmerman said. “But I just have to get as physical as I can and be able to attack the basket.”

Averaging double-digits on the first day and impressing numerous scouts, he’s made strides already at camp in Virginia.

Given that Zimmerman has his sights set on being a more aggressive, physical player, it makes sense that he has attempted to learn from one of the most physical, aggressive players to emerge in the NCAA tournament last season: Michigan’s talented freshman big man, Mitch McGary.

Zimmerman and McGary are built much differently, but the rising junior identifies McGary as a player who “did a lot of things that I try to do.” Zimmerman also said he watched closely how McGary was used by Michigan’s coaching staff during the Wolverines’ especially long postseason.

“The main thing I was watching was how they used Mitch McGary,” Zimmerman said. “As a big man, I gotta see how it goes. They used the same play that my AAU team uses, I was seeing how he does it and how different I can be.”

While a visit is not yet in the works, Zimmerman said he still likes Michigan.

“They’re are great school and they have a great history and a great coaching staff,” he said of Michigan.

The Wolverines have a lot of competition for the big man from Las Vegas. Zimmerman already has picked up offers from UCLA, UNLV, Connecticut, Memphis, Kansas, Oregon, UTEP, Auburn, USC, Arizona, Florida State and Notre Dame. There are also reports that he’s been hearing from Duke recently.

Notre Dame appears to be posing a challenge, as one of Zimmerman’s friends — fellow Bishop Gorman student Ronnie Stanley — recently committed to the Fighting Irish.

“Notre Dame’s also an amazing school,” Zimmerman said of Notre Dame. “One of my close friends that’s a football player committed to Notre Dame so I’m going to be talking to him to see how the school is.”

So far, Zimmerman has been to UCLA and UNLV for visits, with other visits likely coming later in the summer. Michigan could be in line for a trip.

“I’m not sure [if I’ll visit Michigan]. My parents handle a lot of that,” Zimmerman explained. “They might. I think we’re going to start talking about it later in the summer.”