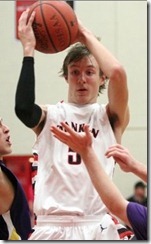 UM Hoops has confirmed that John Beilein offered a scholarship to class of 2015 wing Luke Kennard this afternoon.

Kennard, a 6-foot-5 lefty from Franklin, Ohio, has been one of the top recruits on Michigan’s recruiting board for the past two seasons. He’s the first Michigan target in the class of 2015 to report an offer on June 15th, the first day that the Wolverines extend scholarship offers to rising juniors.

Kennard was the star of Michigan’s last two team camps and John Beilein and his staff have followed him closely on the AAU circuit this spring and with his Franklin high school team over the past two seasons. The wing guard is ranked in the top-35 nationally by both ESPN, Scout and Rivals.

Stay tuned to UM Hoops for more on Kennard and other Michigan targets in the coming hours.