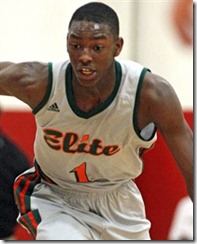 Michigan officially offered Luke Kennard on June 15th but the day was otherwise somewhat uneventful. The start of open contact for rising juniors was slowed down because so many notable prospects were participating in national camps – where they can’t speak with coaches – including the NBPA Top 100 Camp in Virginia and Adidas Nations in Las Vegas.

Jalen Coleman, the other Wolverine prospect most likely to receive an offer, was participating in Adidas Nations training camp in Las Vegas and hadn’t had the opportunity to speak with John Beilein and the Michigan staff as of Sunday morning. Coleman’s father reported to our Joe Stapleton that the conversation is expected to take place on Monday when he gets back to Indianapolis. Coleman is expected to be the second class of 2015 offer for the Wolverines.

Australian born Dante Exum is one of the top guards in the class of 2014 worldwide. He’s eligible for the 2014 NBA Draft as an international prospect and is projected as a top-10 pick. However, there’s a very real chance that Exum, who has already taken an official visit to Indiana, chooses to attend college first. While he’s considered an Indiana lean, NBA.com’s Scott Howard-Cooper is reporting that Michigan is one team that has thrown its name into the ring for Exum’s services along with Indiana, Louisville and Kentucky.

Australian shooting guard Dante Exum is draft-eligible for 2014 and would open next season as one of the top prospects, but said “My gut tells me right now I’m going to college,” partly because he is intrigued by the idea of a run with a top U.S. program and partly because that would allow him to avoid the packed Class of ’14 led by Canadian phenom/incoming Kansas freshman Andrew Wiggins. That would position Exum for 2015. The son of Cecil Exum, who won a national championship with North Carolina in 1982, has made one campus visit, to Indiana, and puts the Hoosiers at the top of his working list if he goes the NCAA route for 2014-15. He loves the college feel in Bloomington and the basketball tradition. He is also getting attention from a lot of other elite programs – mentioning Louisville, Kentucky and Michigan – so no decision is imminent.

Michigan would obviously be playing catch-up, as the Wolverines will have to battle against Indiana and the lure of the NBA to secure Exum’s services. Our friends at Inside the Hall posted an update with Exum earlier this week.