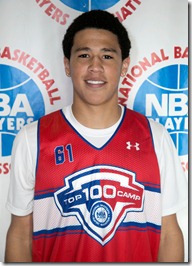 The NBPA Top-100 Camp wrapped up on Saturday and Michigan targets Devin Booker and Kevon Looney were both named to the camp All-Star team by weekend’s end. Booker was named to the All-Star team despite suffering a high ankle sprain and missing the final two games of camp.

Stephen Zimmerman, Kameron Chatman, Caleb Swanigan and Jalen Brunson are among the other Wolverine targets to have big weekends in Charlottesville. Find per-game statistics for Michigan targets at the NBPA Camp below and a round up of notes and national scouting reports after the jump.

Business as usual for Booker

Our first NBPA Roundup was heavy on Devin Booker blurbs and this one is more of the same. Hoopniks notes Booker’s huge Friday performance:

Booker built on his game from last night and had another efficient and impressive outing. Booker scored 10 points with all five of his makes coming within 15 feet. Another surprising thing about his made shots was the fact that they all came with his left hand. His first basket came on a contested lay-up from the right side where he switched to his left hand to avoid the block. He also added in two other left hand lay-ups, a left hand dunk, and then a lefty floater from seven feet out. Booker continued to handle the ball a fair amount and has one of the better handles for a shooting guard in the high school ranks. Not known for his athleticism, Booker also had a violent block on a defender going in for a lay-up.

The talented scoring machine was impressive throughout as he brought activity and energy to the court on both ends and displayed an ability to finish in transition while powering in some solid transition dunks and showing nice athleticism as well.  He can knock down the jumper, score in transition, and has the ability to put the ball in the basket in a variety of ways which he showed again on Friday morning in impressive fashion.

Fresh off of his Michigan offer, Chatman showed off an element of his game that most folks haven’t seen: his three point shooting stroke.

Chatman shot the ball well in Virginia all the way to the perimeter and caught the attention of Hoopniks in the camp’s third session:

Chatman was one of the most impressive players in the EYBL and averaged close to a double-double in points and rebounds with 15.8 and 9.8, respectively. The one thing he struggled with was his outside shooting going 9-54 from the three point line (16.7%). This morning Chatman sported a nice looking stroke and nailed a mix of three’s and deep jump shots. Already one of the most versatile players in the class, if Chatman can continue to shoot the ball well he will be one tough player to guard.

Others were impressed by Chatman as well:

Kameron Chatman can really stroke it – long distance and midrange – a 3 not a 4 at this point. So skilled and finds open space @Tfoekam_3

Loved Kameron Chatman in Hampton and continues to impress. A little Klay Thompson to his game #nbatop100

Kameron Chatman doesn't need his jumpers to fall to be a high level prospect at this stage. But when they are, he's on another level.

Kevon Looney continues to cement himself in the top ten nationally with big performance after big performance on the national circuit. We’ll have an update on Looney’s recruitment later but Michigan continues to recruit the versatile forward in hopes of securing an official visit.

On the court, Looney averaged an impressive 10 points and seven rebounds per game.

NY2LA Sports was among those impressed:

In a fun matchup with Craig Victor, Looney played well, using his unique dribble-drive game by carving out space with his shoulders. Looney also rebounded well and knocked in a three-pointer, as his confidence continues to grow when it comes to his perimeter jumper. – See more at:

Here are some highlights from Looney throughout the weekend from Iowa Elites:

Zimmerman is ranked near the top of the ‘15 class already but continues to impress. Jerry Meyer looks at whether Zimmerman could be the top big man in the class.

The major question running through my mind is who is the top big man in the 2015 class- Zimmerman or Diallo?

Zimmerman has legit NBA center size at 7-0 and has the makings of being a talented pick and pop player with his outside shooting touch. He also has an array of offensive moves and can protect the rim on the defensive end. Since they are playing right now, Tiago Splitter/Tim Duncan comes to mind for Zimmerman.

Diallo is a better rebounder and shot blocker with his athleticism and high energy play. Offensively, he is a rawer product than Zimmerman. With his athleticism, Diallo might have a higher ceiling, especially if he can develop his offense. Kenneth Faried/Paul Millsap come to mind as comparisons for Diallo.

Here’s a quick clip of Zimmerman in action with a longer highlight video from Iowa Elites.

It's going to be tough to find a more steady, reliable point guard in the 2015 class better than Jalen Brunson.

Jalen Brunson. Quick PG with burst. Having some moments. Can penetrate, pass and D it up.

Watch our scouting video of Brunson in action and our update on his likely visit to Ann Arbor this coming weekend.

Class of 2014 Michigan commitment Ricky Doyle doesn’t get out much on the AAU circuit so this was a big opportunity for him to play in front of scouts. However, the leap up in competition appeared to be tough for Doyle, who is still getting back up to full health after an injury that sidelined him for almost half of his prep season.

Doyle averaged three points and three rebounds throughout the event, with his best performance a six point, four rebound outing in game four. Camp settings don’t necessarily cater to big men, and statistics aren’t everything. Doyle did earn a mention from Tim McCormick.

In a camp filled predominantly with class of 2014 players and a handful of 2015 players, class of 2016 big man Caleb Swanigan stood out. Swanigan, who attended Michigan’s College Practice Camp earlier this month, has had a productive spring playing at the 17U level with the Spiece Indy Heat.

Rodger Bohn was impressed with Swanigan on Friday night.

One of the youngest players in attendance, Swanigan carved out his own space in the key and got the ball virtually whenever he wanted. A below the rim player at this point, the 275-pounder used his outstanding footwork and great hands to maneuver around defenders en route to the basket. Swanigan has been consistently losing weight, and given his combination of hands/footwork, expect him to be one of the more highly sought after 2016 posts in the Midwest.

Inside the Hall also touched on Swanigan’s big weekend, noting his improvement since Spiece:

The last time we saw Swanigan at Spiece Fieldhouse, he was playing with two different teams in an attempt to work on his conditioning and shed weight. In Charlottesville, he told us he’s down nearly 10 more pounds over the last month and his game continues to improve. For a player his size — 6-foot-8 and 250-pounds — Swanigan moves extremely well, has good hands and has terrific footwork in the post. Because of his size, he’s able to easily create space and once he seals off his man, it’s usually either a basket or a trip to the foul line. As he continues to improve his conditioning, the intrigue with Swanigan, who Indiana is expected to begin pursuing heavily, will only grow.

NY2LASports was also impressed with Swanigan:

The young wide body big gave a glimpse into the future with a solid 8 point 3 assist 2 rebound effort.  He scored in the post in a few different ways and then stepped out and stroked a mid-range jumper from 12 feet as well.  He has a nice feel around the basket, a soft touch with his various moves, and also displays nice footwork on the offensive end.  A solid performance on Friday morning.

Swanigan scored 17 points and grabbed seven rebounds in his first game and finished the camp with averages of eight points and four rebounds per game. Iowa Elites posted this video of Swanigan in action:

Rising junior center Noah Dickerson (Atlanta/North Atlanta) is one of the biggest kids at NBPA camp at 6-8, 255 pounds. He’s also one of the top students here. “I take pride in my grades,” Dickerson said. “Not many people do.”

Dickerson will unofficially visit Stanford next week. Michigan likes him as well. “I also love basketball,” he said. “I want a mixture of both.”