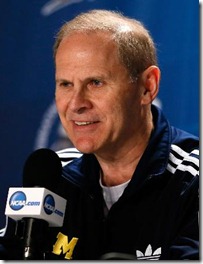 Bacari Alexander and LaVall Jordan hit on the obvious snag in Beilein’s philosophy:

However, the bottom line is that it’s worth waiting for a Michigan offer now. It’s a lot easier to wait to extend a scholarship offer when you can demand attention without one. A Big Ten Championship and a trip to the National Championship game seem to be doing the trick.

The talk of the magnification of parent evaluation and off the court character is also interesting. Beilein has stressed what a great teammate Mitch McGary is for a long time but the idea that parents need to be evaluated because they are ambassadors of the school is definitely a new media idea. Over the last two seasons, Michigan parents have featured heavily in The Journey and just about every other program.  The one element I won’t buy is that Beilein has discovered some sort of loophole in early and late birthdays.

The value of a prospect’s birth date is another. The latter is a topic Beilein often brings up in discussing his young players. Asked about it, the three assistants all laughed.
“No comment,” Alexander said. “That, we can’t tell you.”

While it’s true that Michigan has recruited a lot of kids that are young for their grade, the Wolverines have also landed their fair share of kids that are old for their grade. Mitch McGary, Spike Albrecht and Nik Stauskas are all prep school kids that are a year older while Zak Irvin is also old for his grade, just a few days younger than Caris LeVert and actually older than Michigan State sophomore Gary Harris.

Trey Burke was interviewed by Bill Simmons and Jalen Rose in the Full NBA Job Interview for Grantland.

Michigan announced that Pete Kahler would be taking over Travis Conlan’s vacated Direct of Basketball Operations position while C.J. Lee is moving to a Director of Player Personnel role. Beilein spoke on the internal promotions

“We have great continuity with our staff and we are happy to elevate both Pete and C.J. into new positions as a result of this restructuring process,” said Beilein. “Pete has done a fantastic job shaping our video department into one of the most comprehensive in the country. C.J. has proven to be a valuable ambassador for Michigan Basketball since his playing days as a co-captain through his last three seasons as a staff member. I am confident Pete and C.J. both have the experience and work habits to assist us as we strive to advance Michigan Basketball every day.”

For those unfamiliar with Kahler, this story on his family in the Cleveland Plain Dealer is well worth 30 minutes of your time.

Jalen Coleman was offered by Michigan on Monday but he also added an offer from Arizona before the night was over. Another 2015 recruit, top ten big man Stephen Zimmerman added a marquee offer from Kentucky. Here are some spring highlights of Zimmerman in action:

Michigan is reportedly one of the schools recruiting Zimmerman the hardest.

Just got off the phone with Stephen Zimmerman. The five-star 2015 big mentioned Kentucky & Michigan as most aggressive schools so far. #BBN