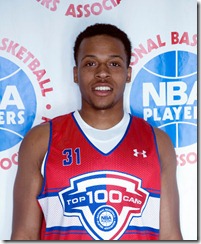 Isaiah Briscoe is an athletic scoring point guard in the class of 2015. And like many other young, skilled point guards with the ability to score, it appears Michigan and John Beilein’s system has become a destination in his mind.

“Their style of play is amazing, pick and roll in the open court,” Briscoe said at the NBPA Top-100 camp. “I feel he lets his guards go, and I wanna be a part of something like that.”

Briscoe is regarded as a top 25 prospect nationally, near other Michigan targets in the class such as recent offers Jalen Coleman and Luke Kennard . Needless to say, he’s fielding attention from all over the country.

The 6-foot-1 Union, N.J. native possesses offers from Baylor, UConn, Florida, Miami, Pittsburgh and Syracuse, among others. Recently, he’s picked up offers from Indiana, Ohio State and Florida State and interest from Michigan.

“I always knew some schools would come in like junior year, senior year,” Briscoe said. “You have some schools that will offer you early and then have others that have been recruiting since eighth grade and they just offered now.”

After playing last season at St. Benedict’s Prep, Briscoe is in the middle of changing high schools. He’s looking around at Oak Hill in Virginia as well as Findlay Prep in Nevada. The point guard position appears to be in Briscoe’s blood — Kyrie Irving, former NBA Rookie of the Year and Duke standout, is Briscoe’s cousin.

“We have a great relationship. I talk to [Kyrie Irving] whenever I get a chance to. Just seeing the things he did, I could just picture myself doing the same thing,” Briscoe said. “Rookie of the year, he’s playing well in the NBA. It’s just great. I actually played against him when we were younger. He’s a great competitor. He has a great skill set. He’s a great player.”

It appears Briscoe has some of Irving’s same skill set, and that caught the Wolverines’ eye. While Michigan’s interest is still preliminary, it’s clear what Briscoe is looking for: a coach who lets his point guards play.

“No. 1, I want to have the ball in my hands as a freshman,” Briscoe said. “I want to play a style I won’t mind playing, and just for the coach to have a full trust in me as another coach on the court.”

Briscoe sees a resemblance between Trey Burke was able to accomplish in a Michigan uniform and how he would like to play in college.

“Michigan, seeing what the coach did with Trey Burke, that’s a big plus because that’s where I want to be.”

For now, Briscoe has an unofficial visit planned for Arizona on June 20th, with a possible visit to Florida in the future. While he doesn’t have a visit to Michigan planned just yet, it appears to be on his to-do list.